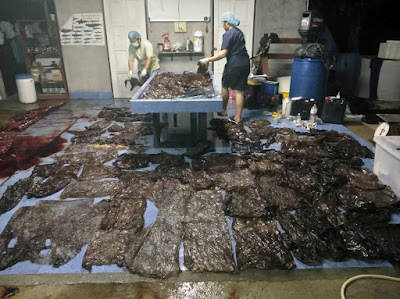 Some 80 plastic bags extracted from within a whale are being laid out in Songkhla, Thailand, in this still image captured from video footage.
Thailand's Department of Marine and Coastal Resources/Social Media/via REUTERS ATTENTION EDITORS

Around 80 sopping wet, black plastic bags lined the floor of an operating room in Thailand last week after they were pulled from the stomach of a whale found stranded on a beach.
The pilot whale, which washed ashore in the southern province of Songkhla, later died after veterinarians tried for five days to save its life, according to the country's Department of Marine and Coastal Resources. An autopsy found nearly 17 pounds of plastic inside the whale's belly, a marine official told Reuters.
The whale's death and photos released by the department serve as a reminder of a growing global problem: plastic debris flowing into the ocean and killing wildlife.
"We are creating the horrible dystopian future that nobody wanted," Enric Sala, an explorer-in-residence and marine ecologist with National Geographic, tells Here & Now's Robin Young.
NPR