A fisherman in the Philippines might have discovered the largest natural pearl ever found — and then kept it hidden under his bed for 10 years.
The pearl's existence was revealed by Aileen Cynthia Maggay-Amurao, a tourism officer in Puerto Princesa, on the island of Palawan.
She says the fisherman is one of her relatives and that he discovered it in a giant clam and kept it as a good-luck charm.
When he was moving out of his home, he decided to give the pearl to Maggay-Amurao for safekeeping instead of transporting it with him — "since it's quite heavy," she told The Guardian.
In fact, the pearl weighs in at 34 kilograms, Maggay-Amurao says — or approximately 75 pounds. 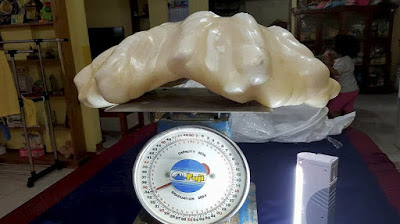 It's more than 2 feet long and 1 foot wide, CNN reports.
That would make it far and away the largest natural pearl ever found in a giant clam. The current world record is held by another pearl found off the coast of Palawan — "The Pearl of Allah" or "Pearl of Lao Tzu," which was discovered in the '30s and cost a diver's life to retrieve.
That pearl, which the Guardian says was valued at $93 million in 2003, weighs 14 pounds — a fraction of the size of the newly revealed pearl.
The 75-pound pearl is now on display in the city hall of Puerto Princesa; the local government has dubbed it the "Pearl of Puerto."
Maggay-Amurao, who says she persuaded her relative to display the pearl instead of hiding it, has called for gemologists to visit Puerto Princesa to examine the pearl for authenticity and an estimate of its value.
A spokesman for the Puerto Princesa government says the fisherman who found the pearl hasn't signed it over to the city, Agence France-Presse reports. "It remains his property," the spokesman says, confirming that the man could be in for an extraordinary windfall.
For the record, a 75-pound pearl would be 170,000 carats. npr
Posted by alisha marie [smiles] at 9:28 PM No comments:

Most of the world didn't know anyone lived in the highlands of Papua New Guinea until the 1930s, when Australian gold prospectors surveying the area realized there were about a million people there.
When researchers made their way to those villages in the 1950s, they found something disturbing. Among a tribe of about 11,000 people called the Fore, up to 200 people a year had been dying of an inexplicable illness. They called the disease kuru, which means "shivering" or "trembling."
Once symptoms set in, it was a swift demise. First, they'd have trouble walking, a sign that they were about to lose control over their limbs. They'd also lose control over their emotions, which is why people called it the "laughing death." Within a year, they couldn't get up off the floor, feed themselves or control their bodily functions.
Many locals were convinced it was the result of sorcery. The disease primarily hit adult women and children younger than 8 years old. In some villages, there were almost no young women left.
"They were obsessed with trying to save themselves because they knew demographically that they were on the brink of extinction," says Shirley Lindenbaum, a medical anthropologist with the City University of New York.
But what was causing it? That answer eluded researchers for years. After ruling out an exhaustive list of contaminants, they thought it must be genetic. So in 1961, Lindenbaum traveled from village to village mapping family trees so researchers could settle the issue.
But Lindenbaum, who continues to write about the epidemic, knew it couldn't be genetic, because it affected women and children in the same social groups, but not in the same genetic groups. She also knew that it had started in villages in the north around the turn of the century, and then moved south over the decades.
Lindenbaum had a hunch about what was going on, and she turned out to be right. It had to do with funerals. Specifically, it had to do with eating dead bodies at funerals.
In many villages, when a person died, they would be cooked and consumed. It was an act of love and grief.
As one medical researcher described, "If the body was buried it was eaten by worms; if it was placed on a platform it was eaten by maggots; the Fore believed it was much better that the body was eaten by people who loved the deceased than by worms and insects."
Women removed the brain, mixed it with ferns, and cooked it in tubes of bamboo. They fire-roasted and ate everything except the gall bladder. It was primarily adult women who did so, says Lindenbaum, because their bodies were thought to be capable of housing and taming the dangerous spirit that would accompany a dead body.
"So, the women took on the role of consuming the dead body and giving it a safe place inside their own body — taming it, for a period of time, during this dangerous period of mortuary ceremonies," says Lindenbaum.
But women would occasionally pass pieces of the feast to children. "Snacks," says Lindenbaum. "They ate what their mothers gave them," she says, until the boys hit a certain age and went off to live with the men. "Then, they were told not to touch that stuff."
Finally, after urging from researchers like Lindenbaum, biologists came around to the idea that the strange disease stemmed from eating dead people. The case was closed after a group at the U.S. National Institutes of Health injected infected human brain into chimpanzees, and watched symptoms of kuru develop in the animals months later. The group, which won a Nobel Prize for the findings, dubbed it a "slow virus."
But it wasn't a virus — or a bacterium, fungus, or parasite. It was an entirely new infectious agent, one that had no genetic material, could survive being boiled, and wasn't even alive.
As another group would find years later, it was just a twisted protein, capable of performing the microscopic equivalent of a Jedi mind trick, compelling normal proteins on the surface of nerve cells in the brain to contort just like them. The so-called "prions," or "proteinaceous infectious particles," would eventually misfold enough proteins to kill pockets of nerve cells in the brain, leaving the cerebellum riddled with holes, like a sponge.
The process was so odd that some compared it to Dr. Jekyll's transformation to Mr. Hyde: "the same entity but in two manifestations — a 'kind', innocuous one and a 'vicious', lethal one." npr
Posted by alisha marie [smiles] at 9:20 PM No comments:


The Evolution of Bacteria on a "Mega-Plate" Petri Dish from Harvard Medical School on Vimeo.
npr

If you've ever wanted to watch a superbug evolve before your very eyes, you're in luck. Researchers filmed an experiment that created bacteria a thousand times more drug-resistant than their ancestors. In the time-lapse video, a white bacterial colony creeps across an enormous black petri dish plated with vertical bands of successively higher doses of antibiotic.
The colony pauses when it hits the first band of antibiotic, creating a stark border between the white colony and the black petri dish. Then the bacteria start to edge their way into the toxic soup. More dots appear and they start growing, racing to the next, stronger band of antibiotic. The bacteria are evolving. After almost two weeks of real time have passed, they've become resistant to the strongest antibiotic and completely taken over the kitchen-table-sized petri dish.
We know dangerous bacteria are getting stronger all the time and that it's our fault because of our excessive and indiscriminate use of antibiotics. Each year, 23,000 people in the U.S. die as a result of superbug infections. But we typically don't get to see superbugs created.
For most people, evolution is just conceptual, says Tami Lieberman, an evolutionary microbiologist at MIT. She and her Ph.D. adviser, Roy Kishony at Harvard Medical School, wanted something that would make the evolution of superbugs seem more concrete. "The goal was to see evolution, not to abstract it," she says.
Their video and report were published Thursday in the journal Science.
Posted by alisha marie [smiles] at 9:08 PM No comments: