presidents that follow up on their state of the union address 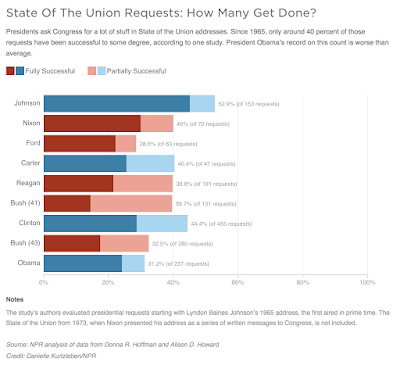 The data reveal a few important, if obvious things: One is that a friendly Congress helps. Lyndon Johnson, for example, had a high success rate, managing to pass landmark policies like Medicare. He also had a Democratic Congress to work with throughout his presidency.
Not only that, but Congress was less polarized back then. As congressional Republicans and Democrats have moved further and further apart ideologically, that may have helped bring down more recent presidents' totals.
There are a couple of revealing details buried in Obama's data, however. One is that for Obama, success last year often amounted to Congress not taking action. In last year's speech, Obama had "full success" on eight measures, according to Hoffman and Howard's data, but five of those eight consisted of things he asked Congress not to do: repeal Dodd-Frank, repeal the Affordable Care Act, impose new sanctions on Iran or shut down the government.
He's not unique in this — Bill Clinton also famously in 1996 asked Congress to "never, ever" shut down the government again. But it's just one sign of how the speech's tone can shift during a time of divided government.
Of course, there's a lot the data can't show, like the magnitude of what presidents have asked for. (Clinton asking Congress not to shut down again might be considered a smaller request than when he asked for health care reform, for example.)
Moreover, the data don't show what the president accomplished without Congress. While Obama has, over the years, asked for (and not received) action on a higher federal minimum wage, paid leave and stronger gun control, he has, in turn, made his own (less-sweeping) executive actions in those areas.
Not only that, but State of the Union addresses are, of course, much more than to-do lists for Congress.
"Any State of the Union has multiple audiences," said Mary Kate Cary, who worked as a speechwriter under George H.W. Bush (though she herself did not write any of his addresses). For example, she said, "There was an Obama State of the Union where the larger audience he was talking to, he was encouraging them to sign up for Obamacare. And then, there was a smaller audience where he wanted the 535 members of Congress not to vote for sanctions against Iran."
Elsewhere, the speeches subtly set up longer-term fights that will play out well after a president leaves office.
"They send a shot across the bow in a battle that may not be won for a couple of years," said Jeff Shesol, a speechwriter for President Bill Clinton. "In the case of [this year's] speech, an election-year speech, the president will certainly be looking in some way to clarify the differences between the two parties," albeit without being overtly partisan about it, he added.
There's no great way to measure the "success" of one of these speeches, Shesol says. However, there's one way in which few of these addresses succeed, says Cary: memorability.