Why Paid Family Leave Has Become A Major Campaign Issue

Lance Mercier knows his job gets harder when a co-worker goes out on leave. But he recently also learned that raising a newborn involves, as he puts it, an "insurmountable" amount of work.
The 39-year-old bank manager from Silver Spring, Md., is currently on leave from work taking care of his newborn son with his wife, Luz.
"As a manager who has had a lot of people go out on leave of absence, it absolutely sucks when they go out on leave," he said. "This puts everything back into perspective for me."
In fact, he will likely end up taking more time off from work than his wife will. Lance's job provides full pay for three months. Luz, meanwhile, gets eight weeks off at 60 percent pay. She can take extra eight weeks of unpaid leave if she wants.
Lance has a new appreciation for family leave, and he's not the only one. For the first time, paid leave has a prominent place in a presidential election. In this week's Democratic presidential debate, for example, Hillary Clinton took a swipe at California Republican Carly Fiorina's opposition to paid family leave.
"California has had a paid-leave program for a number of years," Clinton said, adding, "and it has not had the ill effects that the Republicans are always saying it will have. We can design a system and pay for it that does not put the burden on small business."
NPR has tackled the question of why the U.S. stands virtually alone in not mandating paid family leave, but here's another perplexing one — why now? New parents have needed leave for, well, for as long as there have been working parents. And it's true that workers did get unpaid leave in the 1990s. But what happened in the last few years to nudge paid family leave onto the national political stage?
Here is a list of factors that brought the policy into the spotlight: 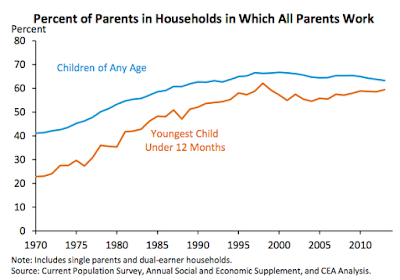