Fond of a range of marine and freshwater vegetation such as turtle grass and eelgrass, the Florida manatee spends most of its waking hours grazing in shallow water. Its gentle motions and 3 to 5 mile-per-hour swimming speeds belie the fact that many of these endangered mammals survive under the stress of repeated, low-dose poisoning. The source: red tides and massive algae blooms that produce an array of deadly toxins. Blooms often blanket the submerged plants they eat causing the manatees to swallow the toxins along with their food or inhale it as they breathe. 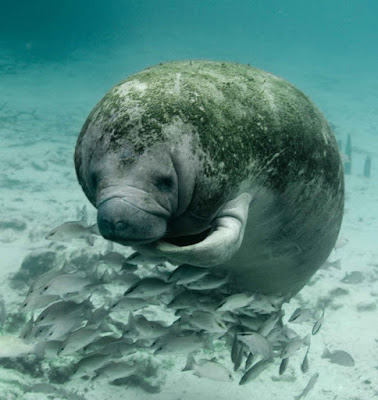 New research by scientists from the Smithsonian Marine Station in Fort Pierce, Fla.; James Cook University in Townsville, Australia and the Florida Fish and Wildlife Conservation Commission, has shown that manatees and green sea turtles (both herbivores) from Florida live with low-levels of a number of algae-produced toxins in their bodies and digestive systems. Sampling muscle and liver tissues and stomach and intestine contents from 14 dead manatees and 13 dead green sea turtles washed ashore in Florida between December 2003 and February 2006, the researchers found most of the specimens had been exposed to sub-lethal levels of the harmful algal bloom toxins: brevetoxin, okadaic acid and saxitoxin. 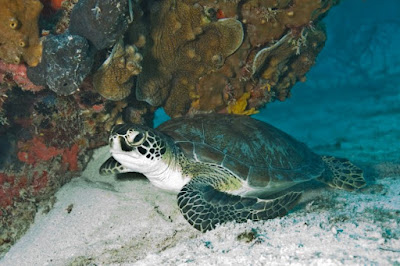 Together, the cumulative impact of these toxins could potentially impair the health and fitness of the animals, the researchers write, making them susceptible to accidental death by reducing their ability to evade boats and fishing lines, or withstand periods of cold weather. Many of the turtles in the study had been severely damaged in accidents, such as fishing-line entangled flippers, cut and cracked shells and boat-propeller wounds.
Florida is a hotspot for harmful algae blooms with more than 70 potentially harmful algal species identified in its waters. “There are many catalysts for these blooms, such as changes in temperature, salinity, turbidity and nutrient run-off,” explains Angela Capper, principle author of the study from the Smithsonian Marine Station and James Cook University. “Some blooms are successive, i.e. when one bloom dies off it provides the nutrients for a subsequent bloom of another harmful species.” The manatees in the study were collected on the Gulf Coast of Florida where red tides are prevalent and the turtles were collected from Florida’s Atlantic Coast.
“Animals are not only exposed to lethal doses of toxins during bloom periods but, also, due to toxin circulating through food webs, for weeks or months after a bloom has dissipated, prolonging the risk to marine animals,” the researchers write. Multiple species of algae also may bloom at the same time, exposing the animals to different toxins simultaneously.–John Barrat smithsonian
“Dietary exposure to harmful algae bloom (HAB) toxins in the endangered manatee (Trichechus manatus latirostris) and green sea turtle (Chelonia mydas) in Florida, USA”was published in the Journal “Harmful Algae” in July 2013.