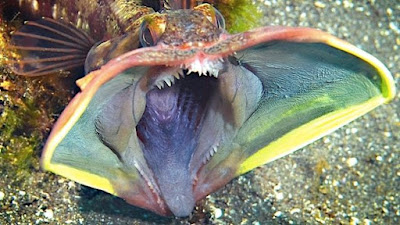 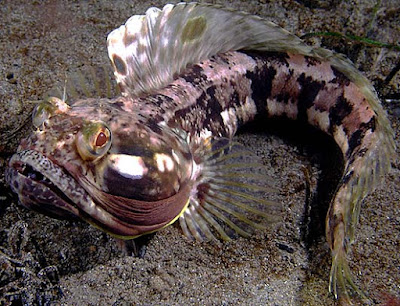 The sarcastic fringehead, Neoclinus blanchardi, is a small but ferocious fish which has a large mouth and aggressive territorial behavior, for which it has been given its common name. When two fringeheads have a territorial battle, they wrestle by pressing their distended mouths against each other, as if they were kissing. This allows them to determine which is the larger fish, which establishes dominance.
They can be up to 30 centimetres (12 in) long, elongate and slender, and are mostly scaleless with great pectoral fins and reduced pelvic fins. They tend to hide inside shells or crevices. After the female spawns under a rock or in clam burrows the male guards the eggs.
They are found in the Pacific, off the coast of North America, from San Francisco, California, to central Baja California. Their depth range is from 3 to 73 metres (9.8 to 239.5 ft).