Oysters May Serve as Link in Transmission of Norovirus

Oysters appear to be an important link in the transmission of norovirus among humans, according to new research from China.

Norovirus — better known as “cruise-ship flu,” “stomach flu” or “winter vomiting flu” — is one of the world’s most common causes of gastrointestinal distress. Although most patients recover after a few days of misery, and sometimes ruined vacations, the virus can be lethal to infants, older adults and people with weak immune systems. 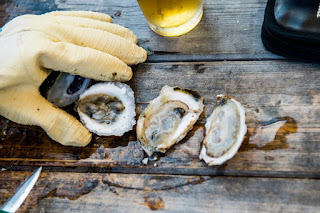 It is highly infectious — especially in confined environments like ships — but exactly how it is transmitted has been a mystery. The unwashed hands of food workers have been blamed. But recently, scientists at North Carolina State built a “vomiting machine” that showed tiny infectious droplets of vomit can fly through the air to infect other people, just as droplets from a sneeze do.

In the current study, published last month in Applied and Environmental Microbiology, researchers analyzed the genetic sequences of 1,077 samples of noroviruses found in oysters. Some sequences had been stockpiled in genetic databases since 1983.

The scientists found that 80 percent of the known human noroviruses matched those found in oysters. The majority of the matches were in oysters from coastal waters, more likely to be contaminated with human sewage.

Noroviruses mutate very quickly, as do influenza viruses, and big outbreaks usually begin after a new strain emerges. There was a “convergence” between new strains circulating in oysters and those circulating in humans, the researchers also found.

Yongjie Wang, a food science specialist at Shanghai Ocean University and lead author of the study, concluded that oysters were an important reservoir for human noroviruses — a place where they can hide between outbreaks and mutate. They also can be transmitted back to humans, presumably when oysters are eaten raw.

A way to detect noroviruses in oyster flesh and in the beds where they grow needs to be developed, Dr. Wang said. nytimes
Posted by alisha marie [smiles] at 12:21 PM