The apocalypse is still on, apparently — at least in a galaxy about 3.5 billion light-years from here.

Last winter, a team of Caltech astronomers reported that two supermassive black holes appeared to be spiraling together toward a cataclysmic collision that could bring down the curtains in that galaxy. 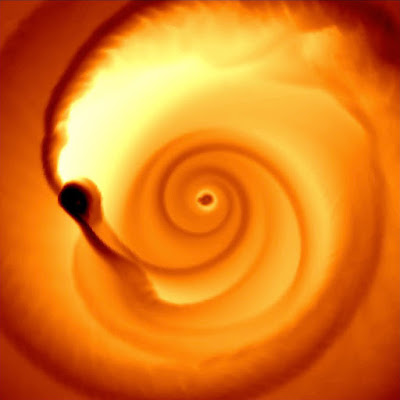 The evidence was a rhythmic flickering from the galaxy’s nucleus, a quasar known as PG 1302-102, which Matthew Graham and his colleagues interpreted as the fatal mating dance of a pair of black holes with a total mass of more than a billion suns. Their merger, the astronomers calculated, could release as much energy as 100 million supernova explosions, mostly in the form of violent ripples in space-time known as gravitational waves that would blow the stars out of that hapless galaxy like leaves off a roof.

Now a new analysis of the system by Daniel D’Orazio of Columbia University and his colleagues has added weight to that conclusion. Mr. D’Orazio, a graduate student, and his colleagues Zoltan Haiman and David Schiminovich propose that most of the light from the quasar is coming from a vast disk of gas surrounding the smaller of the two black holes. nytimes.com
Posted by alisha marie [smiles] at 3:28 PM