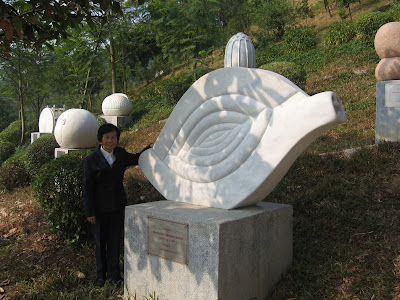 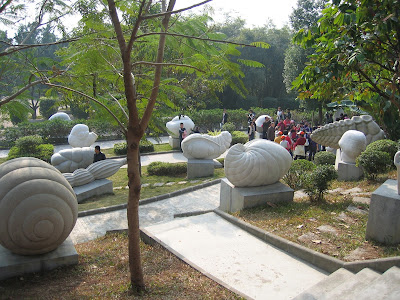 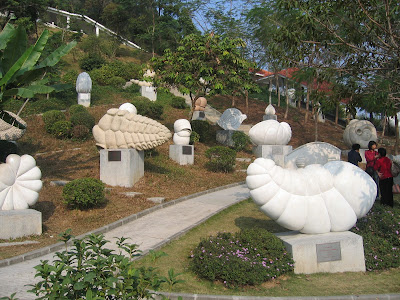 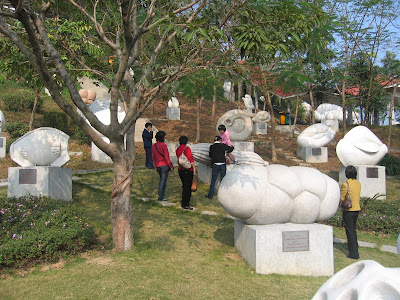 China has another first: a park dedicated to some 114 large sculptures of foraminifera! These marine unicellular microorganisms mostly secrete a calcium-carbonate shell and live at all depths in the ocean. Their stable isotopes are widely used by paleoclimatologists to reconstruct past global climates and ice volume (sea-level changes). They are also important paleobathymetric indicators and indispensible in the field of paleoceanography.

The germ of an idea for a sculpture park first began some ten years earlier when marine geologist Bilal Haq of the National Science Foundation visited the lab of marine biologist and academician Zheng Shouyi at the Institute the Institute of Oceanology in Qingdao. A prolific taxonomist and one of the world’s leading foraminiferalogist, Zheng had meticulously produced palm-size models of over a hundred of these submicroscopic species of both benthic and planktonic foraminifera for educational purposes. Haq was struck by their aesthetic beauty and almost abstract quality that suggested Henry Moore sculptures in miniature. He proposed to Zheng that some of them could be enlarged into sculptures. He also ventured a suggestion that perhaps a whole park populated by such sculptures could be a great outreach project for the general public. Zheng, a woman of action and a politically influential scientist, took the suggestion seriously and was able to convince the authorities in her hometown of Zhongshan (also the hometown of Sun Yat-Sen) in Guangdong Province to do just that. Thus, 114 sculptures of over a 100 different Paleozoic to modern species were carved out of marble, granite and sandstone by artisans under the exacting eye of Zheng Shouyi over a period of five years.