The Swedish Peace and Arbitration Society (SPAS) is to deal with encroaching Russian submarines in Swedish waters with a device emitting anti-homophobia Morse code.
The device – officially titled The Singing Sailor Underwater Defence System, but nicknamed the “gay sailor” – is a “subsurface sonar system”, which sends out the message: “This way if you are gay” in an attempt to deter apparently homophobic Russians.
Russia has come under fire since the Putin administration introduced homophobic laws in 2013 banning “propaganda of nontraditional sexual relations”, in a climate of increasing intolerance towards its LGBT population.
The design of the device features a neon, flashing sign of a dancing sailor, naked but for a cap and small white briefs, surrounded by hearts.
“Welcome to Sweden: Gay since 1944” is written in English and Russian, in a reference to the year of decriminalisation of homosexuality in the Scandinavian nation. 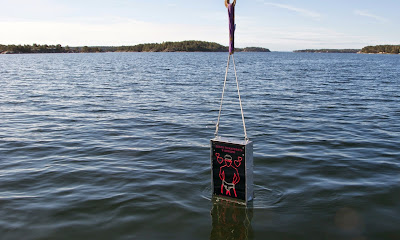 Sweden has cut its military budget in recent years but announced in March it would increase spending, as a result of alleged Cold War-style Russian aggression.
An operation involving helicopters, minesweepers and 200 troops was launched last October to search for a suspected rogue Russian submarine in Swedish waters.
Sweden is currently not a member of Nato. And thanks to the gay sailor defence system, it may never have to be. the guardian
Posted by alisha marie [smiles] at 2:04 PM