How A Bigger Lunch Table At Work Can Boost Productivity 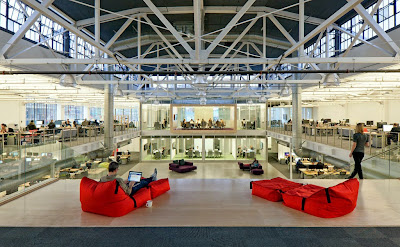 The loft-like San Francisco office of software maker Atlassian has an open central amphitheater, where all-staff gatherings and midday boot camp exercises are held.
Jay Simons, Atlassian's president, says the building was originally a book printing factory. He describes it "as a big, two-story warehouse with a lot of steel girders, a lot of natural light."
But the office's rapid expansion to 300 employees has led to gripes about conference room shortages. "We're butting up on growing out of the space," Simons says. 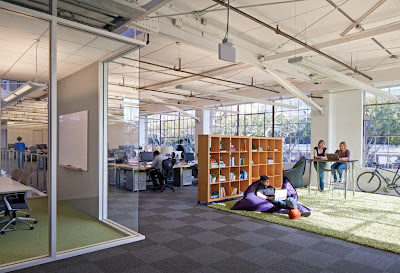 So, early this year, Atlassian installed heat and motion sensors to track when and how often every desk, room and table was used. The result? Desks were used only 20 percent of the workday; conference rooms an average of 40 percent, with peak utilization at mid-morning.
Simons says tracking employees' movements in an anonymous way will help guide choices to convert desk space into meeting rooms, or to stagger meetings to accommodate a growing staff.
"If we're using data to make an environment that people can be more productive in, ultimately that saves us money or helps us make more," he says.
One of Waber's clients found that software developers who ate lunch in large groups wrote 10 percent more code than those who ate solo or with fewer colleagues. Salespeople with more relationships across an organization sold measurably more. That led to larger lunch tables and more strategic placement of coffee machines.
"Where do you spend time, who talks to who and those patterns are so critical when it comes to how effective we are and how happy we are at work," he says.
Waber's company carefully tracks its own employees. Even for things like determining which free snacks tend to draw people into break rooms.
Congdon says designing the ideal workspace is well worth the effort. When Steelcase redid its own offices, she says workers ended up happier with the various options for working and meeting. And, as a bonus, the company reduced its real estate footprint by 48 percent. npr
Posted by alisha marie [smiles] at 12:02 PM