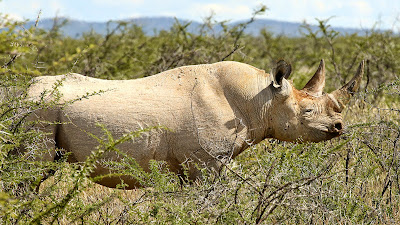 An endangered black rhino is seen in this file photo from the Etosha National Park in northern Namibia last year. An American hunter has killed one of the animals, under a special permit he bought for $350,000.

A Texas hunter who paid $350,000 for the right to hunt a rare black rhino in Namibia has killed the animal. The hunt has drawn controversy and spurred debate over the best way to manage endangered wildlife.
Corey Knowlton won an auction last January for a hunting permit that would allow him to kill a black rhino weighing around 3,000 pounds.
"There are only an estimated 4,000 to 5,000 black rhinos living in the wild," Mark wrote for the Two-Way last year. "Namibian authorities issue five kill permits per year."
The permit came from Namibia's Ministry of Environment and Tourism; each year, it targets several older rhinos that are no longer able to breed – but still pose a deadly threat to younger males. The proceeds are meant to go toward anti-poaching and conservation efforts.
Namibia is facing a surge in poaching — last week, the country's New Era newspaper said that 60 rhinos have been poached so far in 2015, leading Namibia's environmental ministry to double its reward for information about the killings.
After winning the auction, Knowlton then had to get special permission from the U.S. Fish and Wildlife Service to bring the carcass back to America. The agency, which gave its approval in March, writes:
"The removal of limited numbers of males has been shown to stimulate population growth in some areas. Removing specific individuals from a population can result in reduced male fighting, shorter calving intervals, and reduced juvenile mortality."
Black rhinos have "the highest combat mortality rates of any mammal," Namibia's Oshili 24 reports. "Approximately 50 percent of males and 30 percent of females die from combat-related injuries."
But, the news site adds, "Many in Namibia opposed the auction." Protests against the hunt came from international groups; demonstrators also picketed the auction held by the Dallas Safari Club.
As Knowlton told CNN, the rhino hunt could have ended in three possible scenarios – including one in which the wrong rhino could be killed:
"If it charges at us and we are already sure it's the right one, we are going to kill it," Knowlton said. "If we aren't sure if it's the right one, we are going to try and get out of the way. If we don't feel like we can get out of the way, we got to kill it."
Knowlton invited CNN to join him on the hunt; the network's Ed Lavandera spent several days with the hunter and a team of trackers, documenting their walk through the bush. A sample:

"The rhino is close. Knowlton's hands firmly grip his high-powered 500 Nitro Express rifle. Moments later, I see a massive flash of gray leap up over the bushes some 50 feet in front of us. It disappears and you can't tell which direction the rhino is running.
"It's jarring to see this close how quickly these massive creatures can move."

The hunting party picked up the rhino's trail near a watering hole early in the morning. When they finally got close to it, the rhino charged – and was shot several times.
"Any time you take an animal's life it's an emotional thing," Knowlton tells CNN.
"I felt like from day one it was something benefiting the black rhino," Knowlton tells Lavandera shortly after the hunt. "Being on this hunt, with the amount of criticism it brought and the amount of praise it brought from both sides, I don't think it could have brought more awareness to the black rhino."
If you're wondering how the 36-year-old Knowlton could afford the steep hunting fee, we're seeing that he's a hunting consultant based in Dallas, as well as a personality on an Outdoor Channel hunting show, Jim Shockey's The Professionals. He's also a son of Lary Knowlton, the co-founder of BASA Resources, which was characterized last year as one of "the top 20 oil producers in the state of Texas." npr