Not because of those purple unicorns or pinstripe dragons but because of how kids sketch themselves and the very real people in their lives.

In a new study, researchers found that children who experienced chaos at home — including high levels of noise, excessive crowding, clutter and lack of structure — were more likely to draw themselves at a distance from their parents or much smaller in size relative to other figures.

In some cases, these kids drew themselves with drooping arms and indifferent or sad faces.

Their drawings were a reflection of this simple fact: Chaos at home meant parents were interacting with them less and, in many cases, the interactions that were happening were shorter and interrupted. 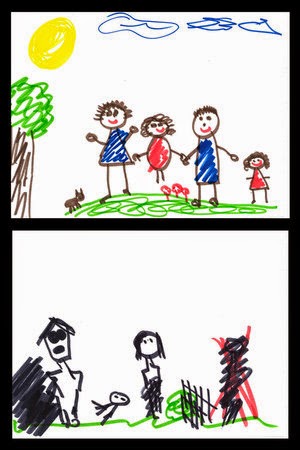 As a result, kids ended up with a depreciated sense of self, says Roger Mills-Koonce, who led the study with Bharathi Zvara at UNC-Chapel Hill. To be clear, Mills-Koonce did not blame parents or caretakers but called this kind of stress in the home a "function of poverty." npr
Posted by alisha marie [smiles] at 12:13 PM