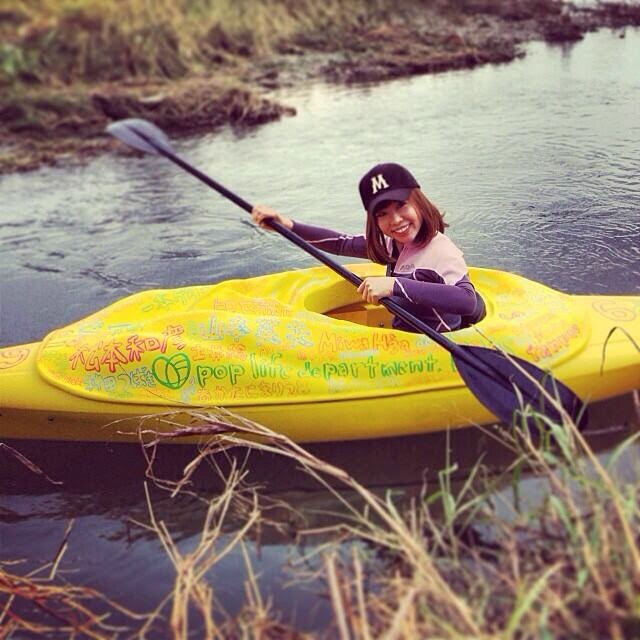 Provocative Japanese artist Megumi Igarashi, who has been arrested twice this year on charges related to her design for a kayak that incorporates a 3-D model of her genitals, has been indicted on charges that she distributed "obscene" data.
The case has attracted wide attention, both for its unique circumstances and for its depiction of how Japan's pornography laws interact with cutting-edge technology and images of the female body.
"Obscenity laws ban pictures of actual genitalia, which normally are obscured in pornography," Japan Times notes today. "If convicted, Igarashi could face up to two years behind bars and a fine of [$20,755]."
Her lawyers say Igarashi will plead not guilty to the charges. She was arrested in early December over what police called her distribution of "obscene" data — computer code that would let other people use a 3-D printer to make their own copy of a kayak that's based on her vagina.
Igarashi, 42, is also known by the name of Rokudenashiko, Japanese slang that is often translated as "reprobate child." She had reportedly offered to send the kayak data to the biggest donors to a crowdfunding campaign that supported her project to build the boat.
An arrest on similar charges in July resulted in Igarashi being released. At the time, she said, "I don't believe my vagina is anything obscene," according to theJapan Times. "I was determined I would never yield to police power."
Igarashi drew headlines last year when she rowed her kayak across a Tokyo river, a trip that was meant "to confront the county's taboos regarding the female form," as The Washington Post reported.
Other than the now-famous kayak, Igarashi makes cartoon-like figurines. As she says in her Twitter bio, her vagina is the "primary motif" of her work. She also tried highlights what her supporters call flaws in Japanese laws.
After her July arrest, Igarashi was released from jail after an online petition drew more than 21,000 signatures.
"Supporters felt that the Japanese laws, which came down too hard on women, while allowing men to celebrate an annual 'penis festival,' should be reconsidered," the website 3Dprint.com reported.
That festival is the Kahamara Matsuri, an event held at a shrine in Kawasaki; the event's name is often translated as the "Festival of the Steel Phallus," which includes a parade that features models and sculptures of male genitalia. npr