This ocean current system transports a substantial amount of heat energy from the tropics and Southern Hemisphere toward the North Atlantic, where the heat is then transferred to the atmosphere. Changes in this ocean circulation could have a profound impact on many aspects of the global climate system.
There is growing evidence that fluctuations in Atlantic sea surface temperatures, hypothesized to be related to fluctuations in the AMOC, have played a prominent role in significant climate fluctuations around the globe on a variety of time scales. eoearth.org 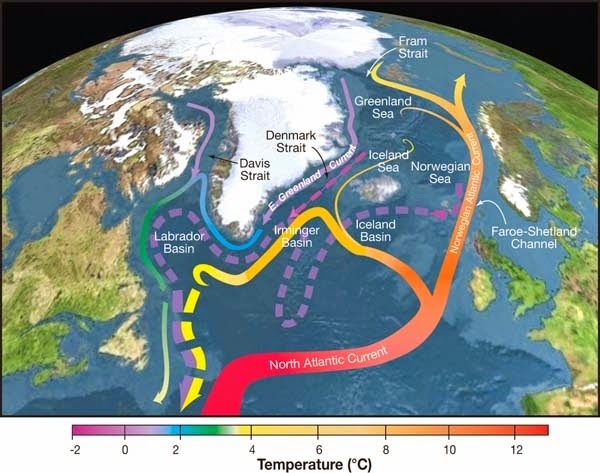 Because the AMOC's heat transport makes a substantial contribution to the moderate climate of maritime and continental Europe, and any slowdown in the overturning circulation would have profound implications for climate change, there have been questions about the likelihood of an "collapse" or an abrupt change. In the a 2008 study on Abrupt Climate Change by the U.S. Climate Change Science Program, the following conclusions were drawn :