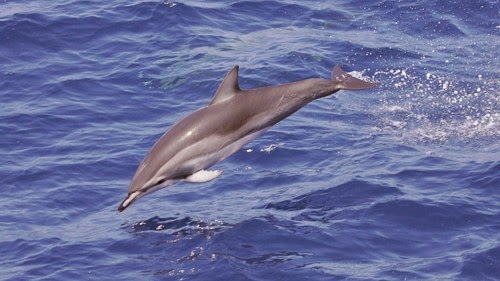 You’ve seen DNA analysis on every forensic criminology show on TV. Normally, it leads detectives to the killer, but in another case—this one on the open ocean—it has led scientists to a hybrid dolphin.
The clymene dolphin (Stenella clymene) is something of a biological riddle. Though these animals were first declared their own species by the American Society of Mammalogists in 1981, they were originally thought to be a subspecies of the spinner dolphin (S. longirostris), despite their similarities to the striped dolphin (S. coeruleoalba). DNA analysis has solved the puzzle, conclusively stating that clymene dolphins are a distinct species.
In her study, Ana Amaral at the University of Lisbon collected both mitochondrial and nuclear DNA from 72 individuals of the three similar dolphin species. Mitochondrial DNA is passed on through the organism’s mother, whereas nuclear DNA comes from both parents. Here, analyzing both was key. In her analysis, Amaral found that the DNA from the nucleus was most similar to the spinner dolphin, while DNA from the mitochondria was most similar to the striped dolphin…
(read more: PBS - NovaNext)                        (photo: NOAA)
Posted by alisha marie [smiles] at 12:12 AM