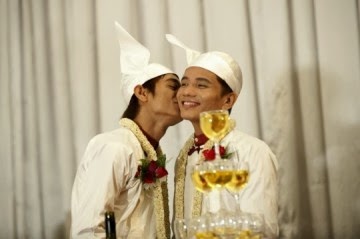 The first same-sex couple to publicly marry in Myanmar tied the knot in a ceremony on Saturday, in a symbol advocates hailed as progress for the predominantly Buddhist Southeast Asian nation.
After 10 years together, Tin Ko Ko and Myo Min Htet exchanged vows in an upscale hotel in Rangoon Saturday, dressed in traditional Myanmar clothes and adorned with garlands of jasmine, reports the Bangkok Post.
Although their union is not legally valid in Myanmar,  the couple acknowledged that the public ceremony — the first of its kind in the nation, also known as Burma — was a significant milestone in a country that still technically criminalizes homosexuality under colonial-era penal codes. Same-sex marriages have taken place before, but this was the first public celebration in the nation, which neither expressly allows nor bans such unions.
"My family accepted me," Tin Ko Ko, 38, said in an emotional speech, according to the Post. "I am so glad that my parents were understanding ... but [my husband] had to overcome many difficulties from his family." advocate.com
Posted by alisha marie [smiles] at 10:31 PM