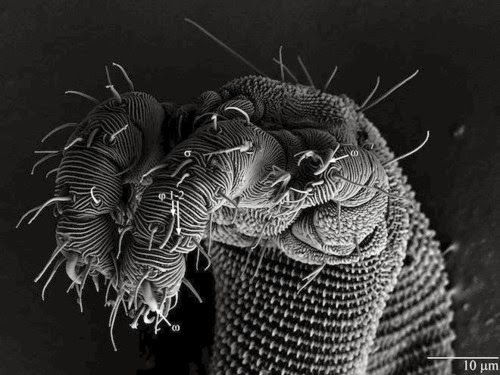 Here’s a brand new species of mite described this week. Is it from some strange sulfur deep sea vent? A parasite recovered from the pores of a pangolin? Nope, it’s from soil on the main campus of Ohio State University. The main author described the collection of this new species as an “event as lackluster as it was serendipitous.”

This tiny animal is so odd, it’s not just a new species; it’s been placed in a new genus within a very bizarre group of mites. Mites, you may remember, are close cousins of ticks. Most ticks and mites look like a blobby body with 8 legs.
This particular group of mites are long and wormy-looking. And they have a really fascinating outer cuticle; it looks like it’s covered with strings of beads…
(read more: Wired Science)
Posted by alisha marie [smiles] at 10:33 PM