This unusual ammonite came from the Late Cretaceous of Japan, between about 90-85 million years ago. Most specimens are approximately 5cm (2in) across. 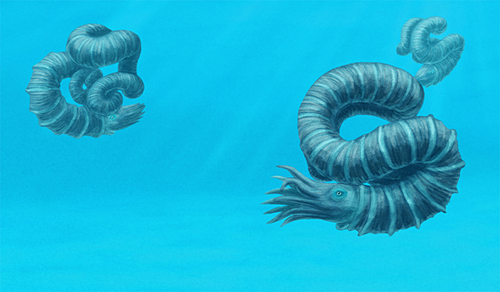 Most ammonites had tightly coiled spiral shells, but somepossessed partially uncoiled or irregular shapes. Nipponiteswas perhaps one of the strangest, with a highly meandering pattern and “ox-bow” bends. It was so weird that the first specimen was thought to be a deformed or diseased member of another species, and it wasn’t until more were discovered that it became apparent Nipponites was something else altogether.
Although it doesn’t look very hydrodynamic, and it may not have been a particularly strong swimmer, the shape of the shell does appear to be very stable — self-righting in turbulent water currents.
Posted by alisha marie [smiles] at 7:46 AM