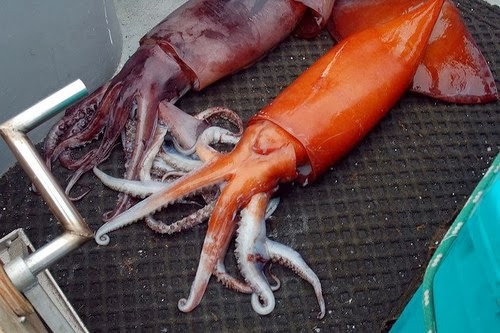 Humboldt Squid (Dosidicus gigas)
Among the largest of all squid, the Humboldt Squid is found in the warm coastal waters from South America to California, with migrants occasionally straying as far north as Alaska. They can grow up to 7 ft (2.25 m) long, a third of which is their eight arms, which are lined with toothed suckers that they use to grasp prey.
The squid spend the day in deep water, up to 2,300 ft (700 m); at dusk they rise to depths of only 660 ft (200 m) or sometimes less in order to feed. They can be fierce predators of small fish and invertebrates at feeding time, but are typically more curious than aggressive outside of that period, and are though to rank among the most intelligent of invertebrates. They have been observed to sometimes hunt cooperatively for food.
Like other cephalopods, Humboldt Squid are capable of rapidly changing their skin pigmentation; it is believed that this is used as a form of communication between individuals, rather than for camouflage, as it is most often observed while they are hunting or feeding. Despite their deep-water habits, they will occasionally wash up on beaches when they die. These squid were caught by research teams off the coast of Monterey, California, fitted with satellite trackers, and released again for study, but the species is hunted commercially in parts of its range.