Atopodentatus Will Blow Your Mind 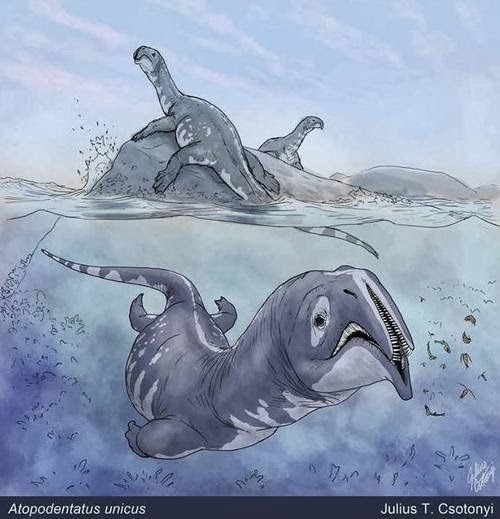 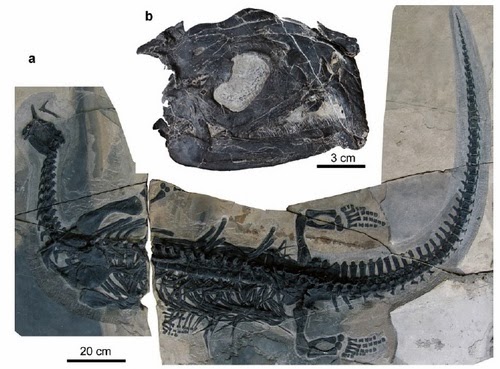 by Brian Switek
The fossil record is replete with wonders. Humungous fungus, dazzling dinosaurs, intricate ammonites, and perplexing protomammals just scratch the surface of such a wide array of fantastic organisms that sometimes it’s easy to become acclimated to the enigmatic and weird. Yet, even then, there are fossils so strange that they make me jolt upright in my seat and think “Wait, what the hell is that?” The latest prehistoric creature to leave me gobsmacked is Atopodentatus unicus.
The roughly 245 million year old marine reptile is beautifully preserved. Uncovered in southwest China and described by Wuhan Institute of Geology and Mineral Resources paleontologist Long Chen and colleagues, the reptile’s nearly complete, nine-foot-long skeleton is laid out as charcoal-colored bones against gray rock. And while not as wholly adapted to an aquatic lifestyle like the eel-like ichthyosaurs found in the same deposits, the stout limbs, hips, and geological context of Atopodentatus hint that this reptile divided its time between land and sea. Then there’s the skull.
Preserved in profile, the cranium of Atopodentatus looks like a bony version of a Scotch tape dispenser.  In front of a rounded orbit, the creature’s snout is a downturned hook that creates an arc of tiny, needle-like teeth that are fused to the sides of the jaw rather than sitting in sockets. Stranger still, most of the teeth in the upper jaw faced each other in a split running between the two halves of the upper jaw. Head-on,Atopodentatus had a zipper smile of little teeth…
(read more: Laelaps blog - National Geo)
illustration by Julius Csotonyi.; photo: Cheng et al.