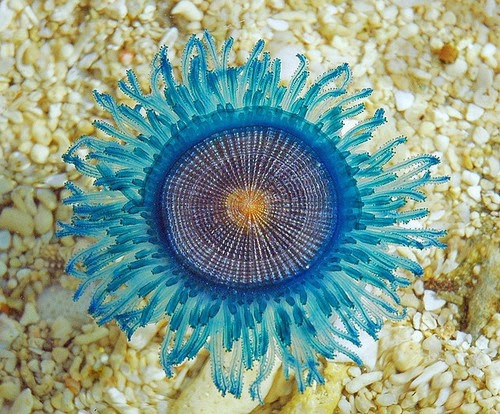 Porpita porpita - Blue Button by Paul Stewart
P. porpita, also called the Blue Button, actually consists of a colony of hydroids, though it is often mistaken to be a jellyfish.
This species consists of two main parts: the float and the hydroid. The float is a yellowish brown, and is shaped like a hard, slightly convex disc, approximately an inch across. It is actually filled with gas which is essential to keeping the organism afloat.
The hydroids can range in color from turquoise to yellow and resemble the tentacles of a jellyfish. Each hydroid branches out in multiple strands that end in knobs of nematocysts. Fortunately, the sting is not lethal, though they will irritate the skin upon contact.
It is dependent on prevailing sea currents and the wind for movement. They are often seen in large aggregations, and it is not uncommon for them to be washed up on the beach in large numbers.