Mapping Emotions On The Body: Love Makes Us Warm All Over

Close your eyes and imagine the last time you fell in love. Maybe you were walking next to your sweetheart in a park or staring into each other's eyes over a latte.
Where did you feel the love? Perhaps you got "butterflies in your stomach" or you're heart raced with excitement.
When a team of scientists in Finland asked people to map out where they felt different emotions on their bodies, it found that the results were surprisingly consistent, even across cultures. 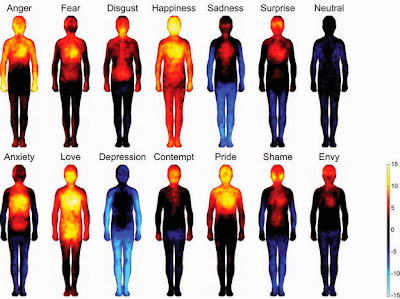 People reported that happiness and love sparked activity across nearly the entire body, while depression had the opposite effect: It dampened feelings in the arms, legs and head. Danger and fear triggered strong sensations in the chest area, the volunteers said. And anger was one of the few emotions that activated the arms.


The scientists hope that these body emoticons may one day help psychologists diagnose or treat mood disorders.
"Our emotional system in the brain sends signals to the body so we can deal with our situation," says Lauri Nummenmaa, a psychologist at Aalto University who lead the study.
npr