Hydrogen squeezed from stone could be new energy source

The method promises a new green energy source, providing copious hydrogen from a simple mixture of rock and water.
It speeds up a chemical reaction that takes geological timescales in nature.
In the reaction, the mineral olivine strips one oxygen and hydrogen atom from an H2O molecule to form a mineral called serpentine, releasing the spare hydrogen atom. 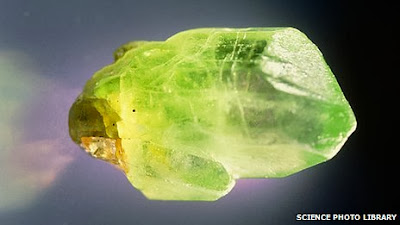 The results were discussed at this week's meeting of the American Geophysical Union in San Francisco, and have been published in the journal American Mineralogist.
The researchers heated olivine minerals in water to a couple of hundred degrees Celsius, and added a little bit of ruby (aluminium oxide) to the mix to provide a source of aluminium atoms.
The whole mix was placed into a miniature pressure cooker, formed of two diamonds, that squeezed the mixture to 2,000 atmospheres pressure.
The transparent diamonds allowed the scientists to watch the reaction take place.
The process occurs, albeit very slowly, in the rocks that form the ocean floors around the globe. In these natural settings it is thought that the hydrogen that is produced either reacts with carbon to form methane, or is used by microbes that live deep in the rocks to sustain life deep beneath the Earth's surface.
It is not yet clear exactly how much of this non-biologically generated methane is being produced within rocks across the planet.
Olivine is a common green mineral, sometimes mined as the semi-precious stone "peridot". The serpentine mineral that forms from it is beloved of sculptors and is often used as a decorative facing stone for buildings. 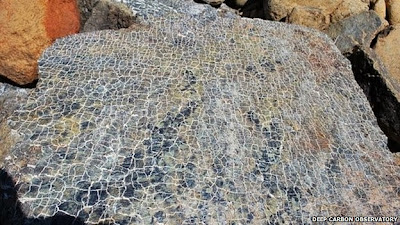 Natural serpentinisation is the way that olivine "rots"

The mineralogists at Lyon were expecting the reaction to take weeks, if not months, so having set the experiment running one afternoon they were shocked to discover that half of the olivine crystal had already reacted when they took a look at it the next morning.
They realised that the addition of aluminium, dissolved from the ruby crystal, was key, speeding up the rate at which the olivine crystals dissolve in water and new serpentine minerals grow. Any source of aluminium could be used, and at the lower temperature experiments the researchers also used bauxite.
Describing their finds, Dr Isabelle Daniel told BBC News: "Serpentinisation is very common in nature and occurs along mid-ocean ridges.
"Hydrogen is measured at all the hydrothermal vents from these places and a huge amount of hydrogen and methane is produced: it is a general feature of the mid-ocean ridges. It is a major source of energy for chemo-synthetic bacteria in rocks." read more: bbc
Posted by alisha marie [smiles] at 9:31 AM