How the Blind Cave Fish Lost Its Eyes 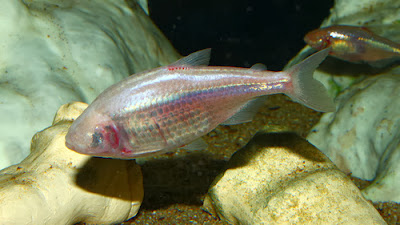 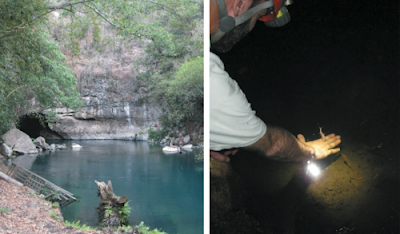 by Joseph Bennington-Castro
Pictured above is a very peculiar fish that lives in a few North American caves. It looks very much like other fish, except in one respect: it has no eyes. The story of its adaptation to life in pitch blackness is one of the weirdest stories in evolutionary history.
Mutations vs. Cryptic Variation:
When people think about how evolution occurs, the classical modelgenerally comes to mind. According to this view, species experience random genetic mutations that confer novel traits when they move to a new environment. The most beneficial traits — those that help individuals better adapt to their new habitat — get passed along to subsequent generations and eventually spread throughout the population.
It’s a relatively simple, easy-to-digest model, but it’s not able to explain all cases of evolution. “Imagine if you had a quick change in the environment,” said Nicolas Rohner, a geneticist at Harvard Medical School in Boston, Massachusetts. “This evolutionary process would take too long.” To rapidly adapt to a sudden shift in environment, a population would have to have some kind of standing genetic variation already available, which nature then selects for.
But how can this “cryptic variation” be maintained and accumulate in a species without actually affecting individuals before the environmental shift occurs? Scientists proposed that something must keep the genetic variation silent under normal conditions; then, when a species relocates to a new, life-threatening environment, it becomes physiologically stressed and that silencing mechanism stops or breaks down somehow.
The Mexican tetra, Astyanax mexicanus, is a freshwater fish found mainly in the rivers throughout central and eastern Mexico, as well as in a few rivers in the United States. At some point in the fish's distant past, populations of A. mexicanus got trapped in pitch-black, underwater caves. In their new — and vastly different — habitats, the fish lost their pigmentation and their eyes, and became better able to store energy and detect changes in water pressure (to find prey and each other).

The trait the cavefish are best known for — their eyeless sockets — was an adaptive change, Rohner explained. Without eyes, the fish can put more energy towards growth and reproduction, rather than using that energy to maintain the useless structures. Additionally, the eyes are easy points of entry for infections. "In that environment, losing your eyes gives you a little bit of an edge," he said.
Interestingly, there are still many surface populations of the Mexican tetra. These fish and their blind counterparts are still considered the same species, and can even interbreed. In effect, A.mexicanus was the perfect model to study, Rohner said.
(read more: io9)