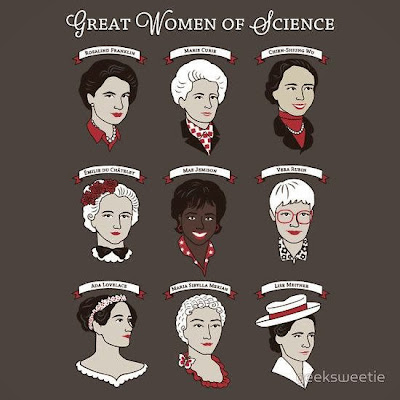 Rosalind Franklin (1920-1958) - British biophysicist and X-ray crystallographer who made critical contributions to the understanding of the fine molecular structures of DNA, RNA, viruses, coal, and graphite.

Marie Skłodowska-Curie (1867-1934) - Polish and naturalized-French physicist and chemist, famous for her pioneering research on radioactivity.

Chien-Shiung Wu (1912-1997) - Chinese American physicist with expertise in the techniques of experimental physics and radioactivity.

Émilie du Châtelet (1706-1749) - French mathematician, physicist, and author during the Age of Enlightenment.

Mae Jemison (1956) - American physician and NASA astronaut. She became the first African American woman to travel in space when she went into orbit aboard the Space Shuttle Endeavour on September 12, 1992.

Vera Rubin (1928) - American astronomer who pioneered work on galaxy rotation rates. She is famous for uncovering the discrepancy between the predicted angular motion of galaxies and the observed motion, by studying galactic rotation curves.

Ada Lovelace (1815-1852) - English mathematician and writer chiefly known for her work on Charles Babbage's early mechanical general-purpose computer, the Analytical Engine. Her notes on the engine include what is recognised as the first algorithm intended to be processed by a machine. Because of this, she is often described as the world's first computer programmer.

Maria Sibylla Merian (1647-1717) - German-born naturalist and scientific illustrator, a descendent of the Frankfurt branch of the Swiss Merian family, founders of one of Europe's largest publishing houses in the 17th century.