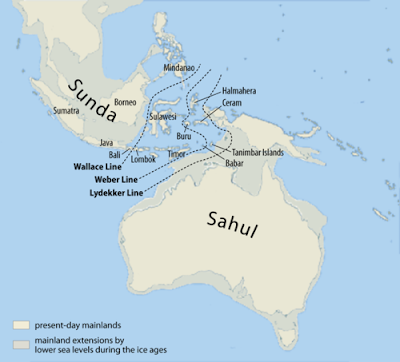 … is a faunal boundary line drawn in 1859 by the British naturalist Alfred Russel Wallace that separates the ecozones of Asia and Wallacea, a transitional zone between Asia and Australia.

West of the line are found organisms related to Asiatic species; to the east, a mixture of species of Asian and Australian origin is present. The line is named after Alfred Russel Wallace, who noticed this clear division during his travels through the East Indies in the 19th century.
The line runs through Indonesia, between Borneo and Sulawesi(Celebes), and through the Lombok Strait between Bali and Lombok. The distance between Bali and Lombok is small, about 35 km (22 mi).
The distributions of many bird species observe the line, since many birds do not cross even the smallest stretches of open ocean water. Some bats have distributions that cross the line, but other mammals are generally limited to one side or the other; an exception is the crab-eating macaque. Other groups of plants and animals show differing patterns, but the overall pattern is striking and reasonably consistent…
(read more: Wikipedia)
Posted by alisha marie [smiles] at 8:25 PM