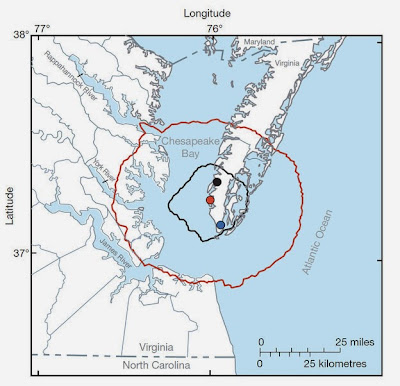 A map showing the impact areas of a large asteroid or comet that struck the Chesapeake Bay some 35 million years ago.

Scientists have discovered a pocket of ancient seawater that's been trapped underground near the mouth of the Chesapeake Bay since the time of the dinosaurs — strong evidence that the Atlantic Ocean was once much saltier than today.
A team headed by Ward Sanford, a hydrologist from the United States Geological Survey, found the 100- to 150-million-year-old seawater deposited between layers of sediment deep under present-day Cape Charles, Va. They detail their findings in the most recent issue of Nature.
Sanford tells NPR that the impact of a large asteroid or comet some 35 million years ago, which has long been known, helped isolate the water, preventing it from being flushed out of the sediments.
The USGS team found the early Cretaceous-era seawater 5,000 feet down as it was drilling in an effort to map a freshwater aquifer. What it found was a watery fossil — the oldest large body of seawater yet identified.
"When we actually drilled and took the core back, we found that there was a large section of the core that had water in it that had about twice the salinity of modern seawater," Sanford tells NPR. (The Dead Sea, for comparison, is nearly 10 times as salty as the present-day oceans.)
The seawater wasn't found in one large pool, but trapped in small pores and rock fractures — so there's no Cretaceous-era life swimming about in it, Sanford says. Still, there is a lot of it: about 3 trillion gallons — or one-sixth the volume of the modern Chesapeake Bay — he estimates.
When the water was trapped 100 million or more years ago, "the Atlantic was a smaller ocean," he says.
"It had only been in existence [at that time] for about 50 million years and it was isolated from the rest of the world's oceans," he says. "It had its own salinity and its salinity was changing at a different rate and by different amounts from the rest of the global oceans."
How did they know that what they were looking at was indeed ancient seawater?
Sanford explains that first, seawater has a chemical fingerprint. Second, uranium in sediments gives off helium as it decays, and this water had a "very, very high" concentration of dissolved helium.
"If you can measure the amount of helium in the water, that can tell you how long the water's been sitting in the ground," Sanford says.
Posted by alisha marie [smiles] at 7:07 PM