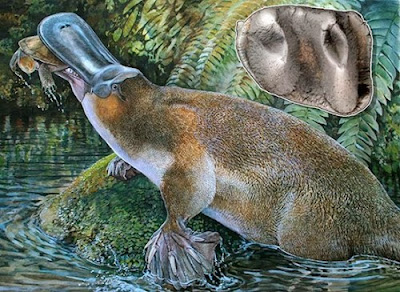 An indigenous Australian legend has it that the first platypus was the odd offspring of a duck named Tharalkoo and a rat. In a nod to the tale, researchers have named a newly identified ancient giant platypus species Obdurodon tharalkooschild.
All that was found of the creature was a single tooth at a site in Queensland, estimated to be between 5 million and 15 million years old. The molar (above, right) shows wear that indicates that the platypus probably crushed hard-shelled prey, like turtles (above, left), also found fossilized at the site.
Modern adult platypuses do not have teeth, but their ancestors did. Based on a comparison of the size of the molar to the teeth of other extinct platypuses, the team reports today in the Journal of Vertebrate Paleontology that O. tharalkooschild was probably about a meter long—bigger than any other platypus and twice the size of the species alive today…
(read more: Science News/AAAS)
Posted by alisha marie [smiles] at 8:09 AM