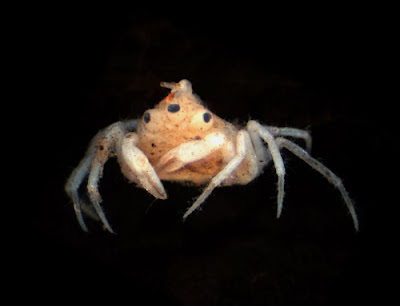 by Michael Marshall
Meet Blinky. This tiny freshwater crab has three eyes, just like itsmutant fish namesake from The Simpsons. But unlike the fictional Blinky, whose deformity is blamed on nuclear waste, this crab may actually be a pair of conjoined twins, one of which is nothing but part of the head.
Gerhard Scholtz of the Humboldt University of Berlin in Germany found the Amarinus lacustris crab in the Hoteo river on New Zealand’s North Island in 2007. Instead of the usual two compound eyes, it has three. It also has a peculiar structure on its back, rather like an antenna. No animal has been seen with this particular pattern of deformities before.
When Scholtz and colleagues took a closer look, they found that the crab’s brain had not developed properly either. It was unusually small, and somewhat deformed…
(read more: New Scientist)