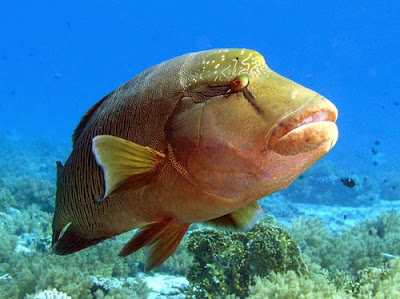 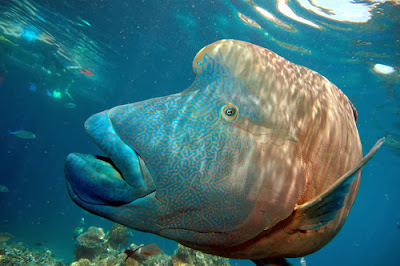 Also known as the Maori or Napoleon Wrasse or the Napoleon fish, C. undulatus is a species of wrasse that is distributed throughout the Indo-Pacific. Adult humphead wrasse typically inhabit coral and lagoon reefs and are opportunistic predators, feeding on a wide variety of animals ranging from crustaceans, molluscs, fish and echinoderms. They are also one of the few animals that can prey on toxic animals like boxfish (Ostraciidae) and Sea hares (Aplysia). C. undulatus will hunt during the day and at night they will retire to caves or ledges at night.
Currently Cheilinus undualtus is listed as endangered and faces threats from habitat loss, capture for the aquarium trade and fishing. To try and combat this C. undulatus is protected in several countries.
Classification:
Animalia-Chordata-Actinopterygii-Perciformes-Labridae-Cheilinus-C. undulatus
Images: J. Brew and Patryk Krzyzak