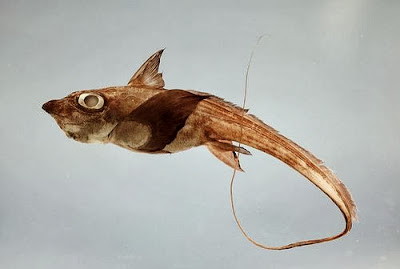 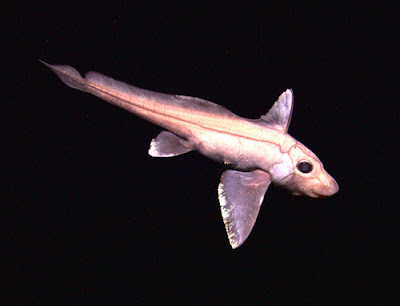 Chimaeras are perhaps the oldest and most enigmatic groups of fishes alive today. Their closest living relatives are sharks, but their evolutionary lineage branched off from sharks nearly 400 million years ago, and they have remained an isolated group ever since. Like sharks, chimaeras have skeletons composed of cartilage and the males have claspers for internal fertilization of females.
Unlike sharks, male chimaeras also have retractable sexual appendages on the forehead and in front of the pelvic fins and a single pair of gills. Most species also have a mildly venomous spine in front of the dorsal fin.
Chimaeras were once a very diverse and abundant group, as illustrated by their global presence in the fossil record. They survived through the age of dinosaurs mostly unchanged, but today these fishes are relatively scarce and are usually confined to deep ocean waters, where they have largely avoided the reach of explorers and remained poorly known to science.
Chimaeras are the only vertebrates to retain traces of a third pair of limbs.
Posted by alisha marie [smiles] at 5:10 PM