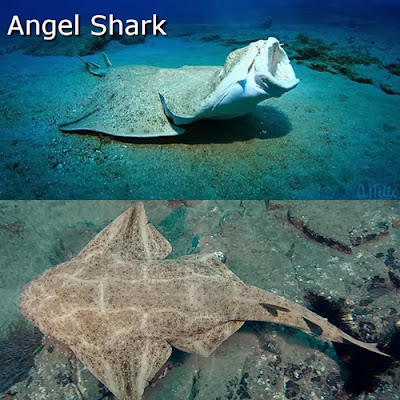 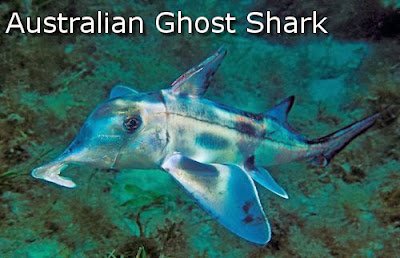 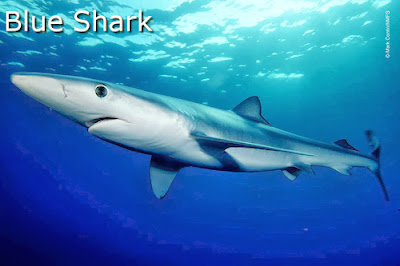 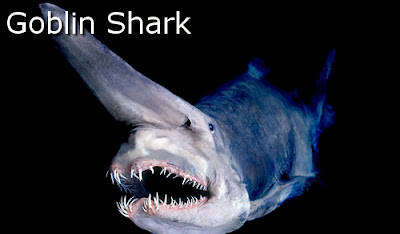 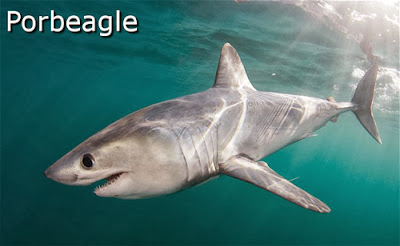 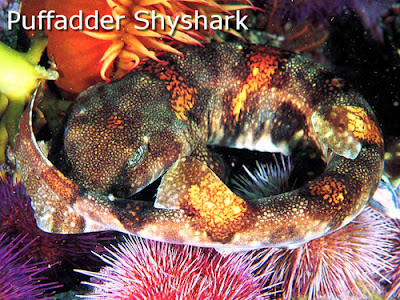 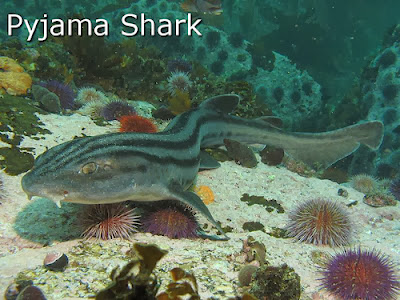 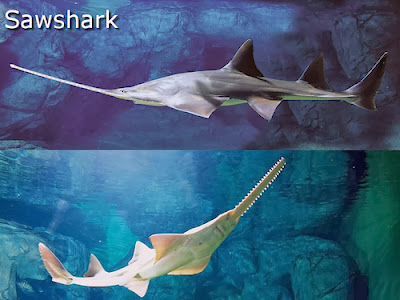 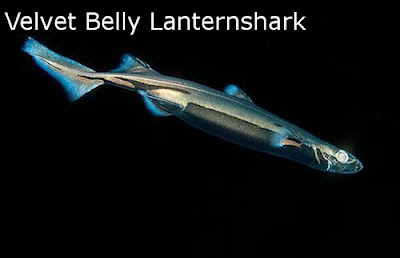 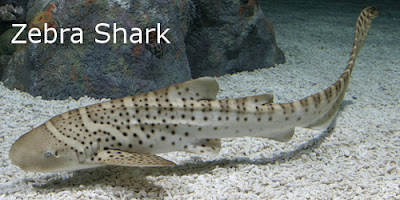 Angel Shark (Squatina)
There are 23 different species of angel shark and all live in shallow, warm seas, though some migrate to warmer waters during the summer. Most types grow to a length of 5 ft (1.5 m). They hunt at night in their own territories. Unlike rays, they have sharp teeth for feeding on shelled prey and small fish. They disguise themselves from prey by covering their bodies in sand and often having sandy-colored skin. An angel shark is hard to see as it lies on the seabed. Its body is so flat that it appears no more than a low mound in the sand. Unlike a ray, it uses its tail rather than its large fins to swim. Read more about this shark
Australian Ghost Shark (Elephant Shark) (Callorhinchus milii)
A chimaera; their length is 2 to 4 ft (60 to 120 cm). Males of the species mature at about 2.13 ft (65 cm). The club-like projection on the snout of the ghost shark is used to search for prey. The end is covered in pores that sense movement and weak electrical fields. Ghost sharks feed primarily on shellfish and molluscs. Recently, the ghost shark was proposed as a model cartilaginous fish genome because of its relatively small genome size. The genome of the ghost shark is estimated to be 910 Mb long (Mb = megabases = 1 million basepairs) which is the smallest among all the cartilaginous fishes. Recently, an Elephant Shark Genome Project has been launched to sequence the whole genome of the elephant shark. Read more about this shark
Blue Shark (Prionace glauca)
A requiem shark; the largest blue shark on record measured 12.6 ft (3.83 m) in length, but they are rumored to get as large as 20 ft (6.09 m). Blue sharks are the great travelers of the world, covering huge distances each year. They do not dive deeply for food, but hunt almost any kind of surface-living fish. They particularly like whale meat and are known to gather in “feeding frenzies” when they find a whale carcass. Blue sharks often school segregated by sex and size, and this behavior has led to their nickname “wolves of the sea”. Read more about this shark
Goblin Shark (Mitsukurina owstoni)
Grows to about 13 ft (4 m) in length. The goblin shark was first discovered off the coast of Japan over 100 years ago, yet little is known about it. Goblin sharks live in water between 330-2,300 ft (100-700 m) deep. They have sensory pores on their long snout which detect prey and their flabby body suggests an inactive lifestyle. Also known as the elfin shark. Sometimes called a “living fossil” as it is the only extant representative of the family Mitsukurinidae, a lineage some 125 million years old. Read more about this shark
Porbeagle (Lamna nasus)
A mackerel shark; reaches a maximum total length of about 12 ft (3.66 m). Porbeagle sharks prefer more temperate seas and may be seen near the British and North American coasts in summer. They are heavily built and partly warm-blooded, being able to keep their body temperature several degrees higher than surroundings. Read more about this shark
Puffadder Shyshark (Haploblepharus edwardsii)
A catshark; typically reaches 2 ft (60 cm) in length. When threatened, the puffadder shyshark (and other members of its genus) curls into a circle with its tail covering its eyes, giving rise to the local names “shyshark” and “doughnut”. It is a predator that feeds mainly on crustaceans, polychaete worms, and small bony fishes. Read more about this shark
Pyjama Shark (Poroderma africanum)
A catshark; it grows up to 3.6 ft (1.1 m) long. This abundant, bottom-dwelling species can be found from the intertidal zone to a depth of around 330 ft (100 m), particularly over rocky reefs and kelp beds. When threatened, it curls into a circle with its tail covering its head. The primarily nocturnal pyjama shark spends most of the day lying motionless, hidden in a cave or crevice among vegetation. It often forms groups, particularly during summer. Also known as the striped catshark. Read more about this shark
Sawshark (Pliotrema and Pristiophorus)
There are 7 species of sawshark; they can range up to 5.6 ft (1.7 m) in length. Sawsharks stir up the seabed with their long, toothed snout, feeling for small fish and crabs with their barbels. Baby sawsharks’ teeth are covered with skin up to the time they are born, so they don’t injure their mother or one another. Read more about this shark
Velvet Belly lanternshark (Etmopterus spinax)
A dogfish; generally no more than 18 in (45 cm) long. Lives in deep water. The velvet belly is so named because its black underside is abruptly distinct from the brown coloration on the rest of its body. Like other lanternsharks, the velvet belly is bioluminescent, with light-emitting photophores forming a species-specific pattern over its flanks and abdomen. These photophores are thought to function in counter-illumination, which camouflages the shark against predators. They may also play a role in social interactions. Read more about this shark
Zebra Shark (Stegostoma fasciatum)
A carpet shark; attains a length of 8.2 ft (2.5 m). Its long tail accounts for half its length. The zebra shark is named after the stripes that break up its shape as it lies in shallow water. The stripes make it difficult to see in shallow water. The stripes become less vivid as the shark ages.Read more about this shark