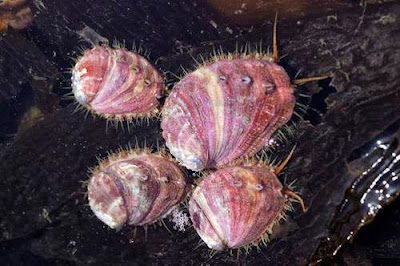 White abalones (Haliotis sorenseni) are slow-moving, algae-eating gastropod mollusks. Rapid overharvesting since the 1970s has resulted in white abalones becoming the first marine invertebrate listed as endangered on the Endangered Species Act in 2001.

The population is struggling to recover because they need a mate nearby in order to breed—a difficult task with a small and scattered population. A 2010 assessment stated that white abalone has declined 78% in the last ten years, effectively making them reproductively extinct in the wild.
Scientists around the world are working hard to stop this from happening by breeding abalones in captivity. This process is difficult, but breeding programs have successfully bred white abalones.
(via: Smithsonian’s Ocean Portal)
Posted by alisha marie [smiles] at 5:58 PM