This skull may have just rewritten the book on human evolution 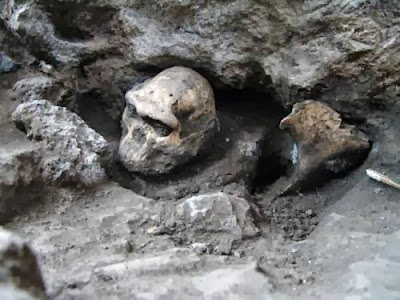 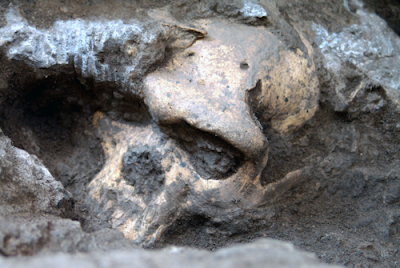 by Robert T. Gonzales
It’s a discovery that could change our understanding of early humans. An incredibly well-preserved, 1.8-million-year-old skull from Dmanisi, Georgia suggests the evolutionary tree of the genus Homo may have fewer branches than previously believed.
A detailed analysis of the skull (above, in situ, and at left, fully excavated), appears in the latest issue of Science. In their report, the researchers – led by Georgian anthropologist David Lordkipanidze – write that it is “the world’s first completely preserved hominid skull.” And what a skull it is. It suggests that the earliest known members of the Homo genus (H. habilis, H. rudolfensis and H. erectus) may not have been distinct, coexisting species, at all. Instead, they may have been part of a single, evolving lineage that eventually gave rise to modern humans.
Discovered alongside the remains of four other early human ancestors, all of which date to roughly 1.8-million years ago, “Skull 5,” as the specimen is called, has a relatively tiny brain case and a protruding lower jaw – anatomical features reminiscent of Australopithecus, a more primitive human ancestor. And yet, its upper jaw resembles that of a 2.3-million-year-old specimen from Ethiopia, thought to have belonged to H. habilis; its bulky browline bears a strong resemblance to that of H. erectus; and its long, vertically oriented upper face and the overall shape of its braincase are unmistakably Homo. An anatomical chimera, Skull 5 possesses a surprising combination of features that have never before been observed together in an early Homo fossil…
(read more: io9)