Oregon's Mile Of Glacier Caves: A Hidden, And Disappearing, World


In the past two years, explorers Eddy Cartaya and Brent McGregor have used ropes, ice screws, wet suits and flashlights to map out more than a mile of passages underneath a glacier on Oregon's Mount Hood, in what are thought to be America's largest known glacier caves outside Alaska.
The caves are in the Sandy Glacier, which clings to Mount Hood's western slope, thousands of feet above the ground.
Some of the shafts are tight; others balloon out into spaces measuring 80 feet wide. In the caves, they sometimes scale waterfalls that were frozen in place. And along the way, they measure how the caves are changing.
Cartaya and McGregor took Oregon Public Broadcasting's Amelia Templeton and others into the caves at the end of this past summer, showing off astounding caves that look like sets from a sci-fi movie.
The striking scenes inspired Templeton and her OPB colleagues to create Thin Ice, a stand-alone presentation about the caves. OPB is also devoting an upcoming episode of its Oregon Field Guide to the find. 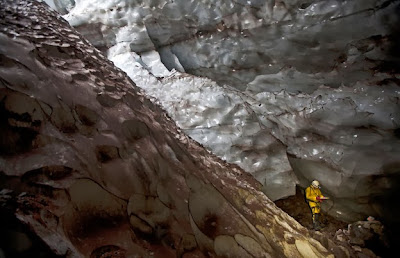 In addition to yielding jaw-dropping images of a world hidden from plain view, exploring the caves could also bring valuable information to scientists who study glaciers and climate change.
"Most glacier caves are seasonal. They form during the melting season. And disappear in the winter, crushed underneath the weight of the ice," Templeton reports. "But the caves in the Sandy Glacier appear to be growing larger every year. And as they grow, the glacier shrinks."
In the past 100 years, Sandy Glacier has shrunk by about 50 percent, she says.
As glaciologist Andrew Fountain of Portland State University tells Templeton, "This could be an important insight into how these glaciers are decaying,"
Cartaya and McGregor say that their awareness that the caves and the glacier will all disappear someday is part of what drives them to keep exploring and documenting.
"These are short-lived treasures, and once they're gone they're gone forever; they'll never be back," Cartaya tells Templeton.