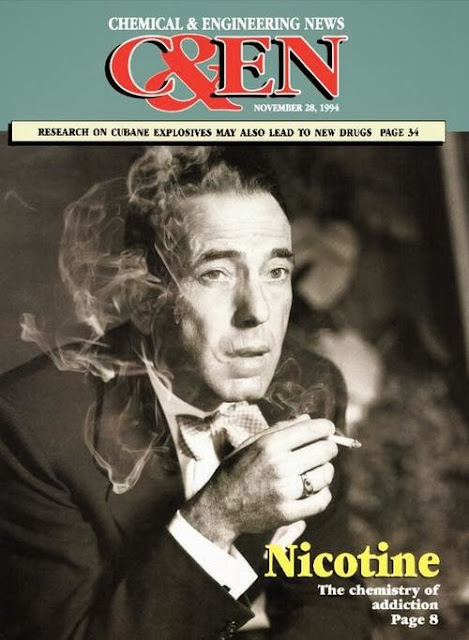 Nicotine acts on neurons of the mesolimbic reward system in the midbrain.
A burning cigarette quickly converts from a tobacco storehouse to a chemical factory, producing some 4,000 compounds. Of these, 400, including nicotine and carbon monoxide, are toxins, and another 40 are carcinogens. Nicotine itself is distilled at the tip of the burning cigarette. There it is absorbed onto tar (particulate matter) droplets that are carried deep into the lungs with each intake of smoke. Nicotine’s trip from the lungs to the brain takes about 10 seconds. After it reaches the brain, nicotine, in its pharmacologically active levorotatory form, (S)-nicotine, shanghais receptor sites on neurons normally activated by the natural nerve-tonerve messenger acetylcholine. (These are called cholinergic receptors.) And by impersonating acetylcholine, nicotine alters the way the brain processes information. In the brain, nicotine becomes one of nature’s chemical chameleons. It acts on the reward system to cause the release of dopamine—and that makes people feel good. It acts through other brain chemicals thought to be important for activating and alerting systems. And it acts on still other systems that are probably involved in cognition and motivation. "Nicotine is a pretty amazing drug. If it didn’t kill you, it would be pretty terrific," says Edythe D. London, chief of the National Institute on Drug Abuse’s (NIDA) neuroimaging and drug action branch. It’s also “an unusually insidious addictive drug,” declares Avram Goldstein, Stanford University professor emeritus of pharmacology and author of “Addiction: From Biology to Drug Policy.” It calms and it stimulates. It affects mood, appetite, and cognition. Many smokers claim smoking helps them handle stress and boredom, control their weight and appetite, and function better in unfamiliar social situations. How can a single molecule do all these things? Using a fascinating array of research tools, trained laboratory animals, and exotic compounds, scientists are plumbing the depths of the brain in search of answers.
-Lois R. Ember
The Nicotine Connection: Scientists are teasing out the chemistry of nicotine addiction as tobacco firms and government regulators tussle over possible controls on cigarettes
Chemical & Engineering News, November 28, 1994