Americans Fall Behind In The 'Getting Older' Race

As we all know, Americans are living longer. Women especially. But here's what you may not know: French, German, Swedish, Italian, Japanese, British, Dutch and Canadian women are living longer too, but their lives are getting longer faster than ours. Take a look at this from the National Academy of Sciences. 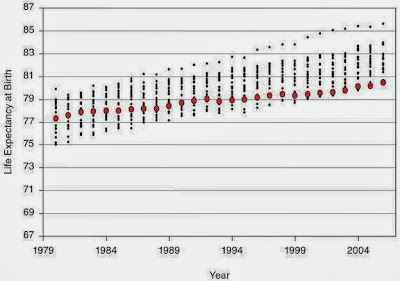 This is a comparative life expectancy chart. The red dots show the average lifespan of American women compared to women in nine other well-off countries (represented by the black dots.) As you can see, we aren't doing so well. Or, rather, American women since 1979, compared to those other countries, are underperforming. We are at the bottom of the improvement pile.
That happy little dot dancing higher and higher above each pile since 1989 is Japan. That's where women live longest on Earth. As of 2006, when the data were collected, the average Japanese female died at 85.98 (just short of an 86th birthday). American females, on average, died six years earlier, at 80.2. It's a gap that seems to be widening. French women come up second (84.39), Italian women third (84.09).
Here's the chart for men: 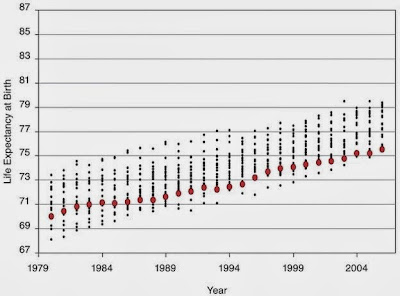 American men are also falling behind. The longest lived males on Earth are Australians (at 79.27 on average), followed by Japanese (79.20) then Swedes (78.92). The average American guy departs at 75.64. The lag is not as drastic as for women. The ladies have the bigger problem.
Back in the '60s, American women were among the longest-lived in the world. But then, between 1980 and 2006, female life expectancy grew at about 60 percent the rate for comparative countries and we are now ranked 28th.
What happened?
In 2011, the National Institutes of Health issued a report that tried to make sense of it all. Right away, they found our weak spot. "U.S. women have relatively high mortality rates at the younger older ages," they said, which means when women hit their 55th birthdays, for the next almost 20 years, roughly 55 to 75, they will die more often than women in comparable countries. Americans get more lung disease, more heart disease, more diabetes. If Americans reach 75, they get competitive again, but that early old age is where we lose ground. American men showed pretty much the same weakness at roughly the same times.
The authors declared themselves puzzled. "The relatively poor performance of the United States," they wrote, is "perhaps all the more surprising in light of the fact that the United States spends far more on health care than any other nation in the world, both absolutely and as a percentage of gross national product."
So what's causing this difference? The panel explored the usual suspects. Are Americans too obese? Do they smoke too much? Exercise too little? Eat poorly? Have too many poor people? Too much hormone therapy? Is the health care system itself to blame?
Good questions, all, but the panel was unable to discover any special culprit. To my surprise, they found our health disadvantage "could not be explained simply by reference to problems associated with an inefficient health care system, the lack of universal health care coverage, or large racial and socioeconomic disparities in the United States." Which left them pretty much where they started — puzzled. "To date," the authors conclude, "no satisfactory explanation of these patterns has been proposed."
The Super-Old ...
Whatever it is we're doing wrong hasn't yet compromised our population of very old or super-old people. We have a highly competitive group of Americans in their late 80s, 90s and early 100s. The dangling question is how old can today's babies expect to be? Will there be lots and lots of centenarians at the turn of the next century?
For the moment, all we know is that the oldies keep getting older. The NIH report says that in 2002, 2003 and 2004, life expectancy in France increased by 10 months, which is a crazy pace (and I'm guessing it hasn't stayed that way). At some point, one imagines, we will hit a wall. The Japanese, the French, the Australians can't keep it up forever, but where that wall is, or who will hit it first, I don't know.
... Get Even Older ...
In July, 2010, The Japanese Ministry of Health, Labor and Welfare suggested Japanese women may be averaging 86.44 years, while Japanese men are closing in on 80. "Remarkably," says the NIH report, "these levels represent increases in average life spans of almost five months for women and four months for men compared to the previous year." The race to get older, apparently, gallops on. But Americans, alas, aren't keeping up.
npr