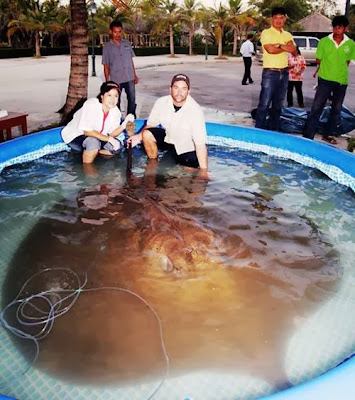 by Matt Simon
Scientists first described Southeast Asia’s giant freshwater stingray in 1990, which can grow to more than 16 feet long and 1,300 pounds. And while it packs a 15-inch, poisonous, serrated stinger, it’s actually a gentle, inquisitive creature, an endangered titan that researchers are scrambling to understand before humans drive it to extinction.
Though this could be the largest freshwater fish on the planet, accounts of its existence only emerged in Thai newspapers in the early 1980s. It’s exceedingly rare to see one, in part because it destroys all but the strongest fishing rods and lines. Even if you have the right equipment, the giant freshwater stingray tends to take exception to being hunted and buries itself in the river bottom when hooked.
In 2010, 15 anglers working in shifts reportedly spent six hours reeling one in, which either says something about the stingray’s strength or the group’s collective fishing skills. The fish can drag boats for miles, and even pull them under…
(read more: Wired Science)
photo: Zeb Hogan, University of Nevada