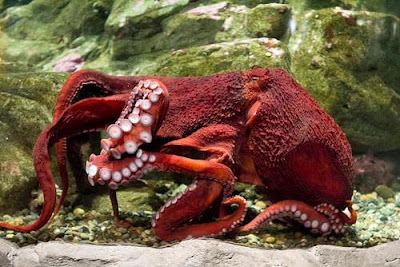 The world’s largest octopus lives on the Pacific coasts of North America and Asia. Known as the Giant Pacific Octopus, or the North Pacific Giant Octopus, it can grow as large or larger than you in its 3-5 year lifespan - its arm-span might exceed 14 ft (4.3 m).
They typically live at depths of around 215 feet (65 m), and use their suckers to catch smaller invertebrates and fish, though they’ve been known to take larger prey such as the small shark Spiny Dogfish,Squalus acanthias.
The species is semelparous - that is, they reproduce only once and then die, much like Pacific salmon. Females lay up to 100,000 eggs, which are fertilized by the male’s spermataphore, a “package” of sperm that can be up to 3.3 ft (1 m) long. The females guard their eggs until they hatch; they stop hunting and eventually die of starvation.
Octopuses are commonly considered the most intelligent of invertebrates; captive individuals have demonstrated the ability to problem-solve, such as learning to twist the lid off a screw-top jar to get at food inside.
Posted by alisha marie [smiles] at 7:03 PM