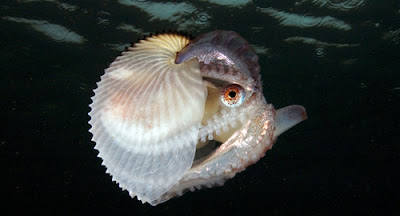 SCIENTISTS SOLVE MILLENNIA-OLD MYSTERY ABOUT THE ARGONAUT OCTOPUS
Ed Yong / DIscoverMag
The argonauts are a group of octopuses unlike any other. The females secrete a thin, white, brittle shell called the paper nautilus. Nestled with their arms tucked inside this beautiful, translucent home, they drift through the open ocean while other octopus species crawl along the sea floor. The shell is often described as an egg-case, but octopus specialists Julian Finn and Mark Norman have discovered that it has another function – it’s an organic ballast tank.
An argonaut uses its shell to trap air from the surface and dives to a depth where the encased gas perfectly counteracts its own weight, allowing it to bob effortlessly without rising or sinking. Finn and Norman filmed and photographed live animals in the act of trapping their air bubbles, solving a mystery that has been debated for millennia.
Since 1923 and the work of Adolf Naef, the shell has been viewed as a container for the argonaut’s eggs. After mating with a male (who is around 8 times smaller and 600 times lighter), the female secretes the papery shell using the tips of two large tentacles. She lays her eggs within the structure before snuggling inside herself. Besides her eggs, her only housemate is one of the male’s arms – the hectocotylus. The arm doubled as a penis, snapped off during sex and stays inside the female’s body….