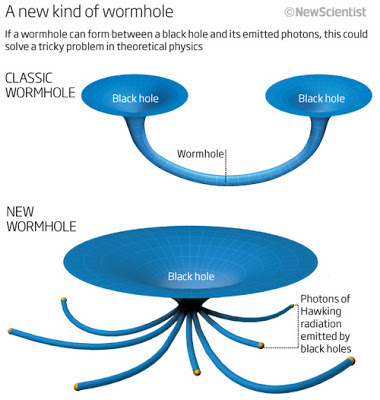 WORMHOLES – tunnels through space-time that connect black holes – may be a consequence of the bizarre quantum property called entanglement. The redefinition would resolve a pressing paradox that you might be burned instead of crushed, should you fall into a black hole.
Knowing which hazard sign to erect outside a black hole isn’t exactly an everyday problem. For theoretical physicists, though, it reveals an inconsistency between quantum mechanics and general relativity. Solving this conundrum might lead to the sought-after quantum theory of gravity.
Relativity says if you fall into a black hole, you would die via “spaghettification" – a gradual stretching by ever-more intense gravitational forces. But last year, when Joseph Polchinski at the University of California in Santa Barbara and colleagues explored the quantum implications of black holes, they hit a problem. Black holes emit photons via something called Hawking radiation, and these are “entangled" with the interior of the black hole and also with each other. This breaks a quantum rule that particles can’t be entangled with two things at once…
(read more: New Scientist)
Posted by alisha marie [smiles] at 5:09 PM