The Moken are a semi-nomadic Austronesian people, who live in the Mergui Archipelago, a group of approximately 800 islands in the Andaman Sea that is claimed both by Burma and Thailand.
Thought to have migrated to Thailand, Burma and Malaysia from Southern China approximately 4,000 years ago, the Moken have traditionally lived on hand-built wooden boats called kabang for most of the year, migrating in flotillas between islands according to factors such as subsistence needs, wind patterns, security concerns and disease. They have historically shunned material possessions and rejected outside technology.
From May to October, when the south-western monsoon brings heavy rain and big seas, they have traditionally lived – as the semi-nomadic families still do – in temporary stilt houses on the eastern side of the islands, where they find protection from blustery winds.
Today, their maritime existence that recognizes no national boundaries is endangered. A peaceable people, they have frequently been persecuted by the Burmese and Thai governments, both of whom are wary of their border-less lives, and have tried to settle the Moken permanently in national parks.
Their semi-nomadic numbers have diminished in recent years due to political and post-tsunami regulations, companies drilling for oil off-shore, governments seizing their lands for tourism development and industrial fishing. ‘Today, the big boats come and take every fish. I wonder what they will do when the ocean is empty?’ Hook Suriyan Katale told film-maker Runar J. Wiik, who has created the website Moken Projects to raise awareness of their situation. Many Moken now live permanently in bamboo hut ‘villages’, selling handicrafts as souvenirs and working as boatmen, gardeners and garbage collectors for the tourist industry.
A few Moken families, however, still sail across the turquoise waters of the Mergui Archipelago in their kabang for seven or eight months of the year. ‘For the Moken, the ocean is our entire universe,’ says Hook Suriyan Katale. 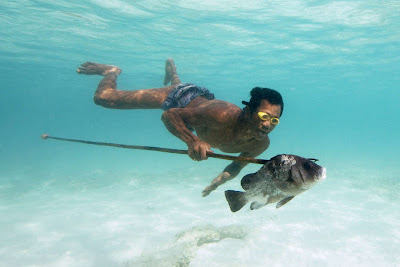 The Moken are skilled navigators and divers. Pe Tat wears home-made goggles made from wood and plastic fashioned from water containers. The lenses are constructed from the glass of broken bottles and glued to the goggles with tree-sap. 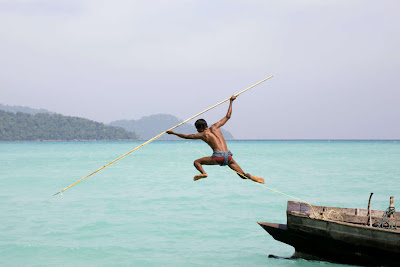 The Moken eat fish, dugong, sea-cucumber and crustaceans, which they catch with harpoons, spears and hand-lines. Hook Suriyan Natale says that such sustainable methods ensure that ‘there will always be fish left in the sea.’
They also use nets to catch shell-fish from the rock pools and forest shallows. Before certain species are harvested, the Moken make spiritual offerings as a mark of respect, using the spirit pole or ‘lobong’, which bears the faces of protective spirits.