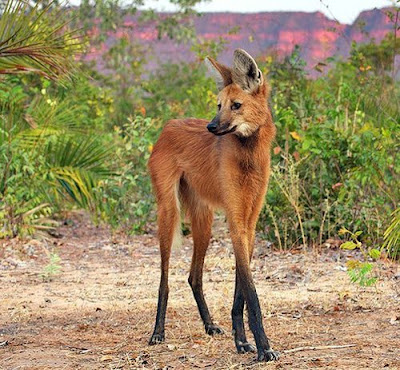 While it might have a mane of sorts, the maned wolf is not a wolf. In fact, it’s not even a fox, even though it might look like a fox on stilts. Speaking of stilts, these guys are the tallest living canid, measuring up to 42 inches (106 cm) at the shoulder! Historically, the maned wolf was placed in the genera Canis and Vulpes (the wolves and foxes, respectively), because of superficial morphological similarities.
However, on further anatomical examination, and later, DNA analysis, the maned wolf was found to be unique in the genus Chrysocyon. There are no known extant or extinct species that come close to the maned wolf, though part of that is almost certainly due to a lack of fossilized remains - there may have been other members of the genus in the Pleistocene and Holocene that have not been found yet.
Currently, one of the most accepted theories on why the maned wolf is so unique is that it just happened to be the sole surviving species of its genus, during the Pleistocene (or Quaternary) extinction. That extinction event snuffed out all the large canids of South America, along with almost 3/4 of all the large mammals living at that time.
The diet of this species may lend a clue as to how it survived the mass extinction: it’s extremely omnivorous. While they search out and eat birds, small mammals, and reptiles, they also eat  berries, leaves, fruits, and tubers, and spread the seeds of many plants. Their diet also lends the maned wolf its nickname - the Skunk Wolf. They produce pyrazines and other musky plant derivatives that they spray about to mark territory. In fact, the smell of the maned wolf enclosure at the Rotterdam Zoo set off a search for marijuana, before they discovered the true source!
Posted by alisha marie [smiles] at 10:26 AM