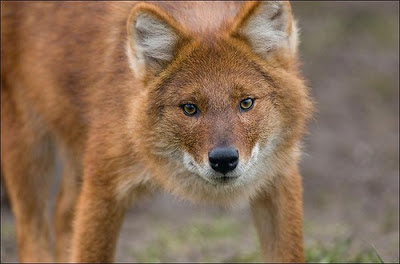 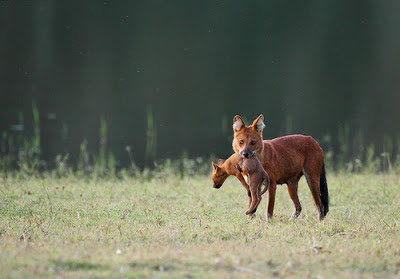 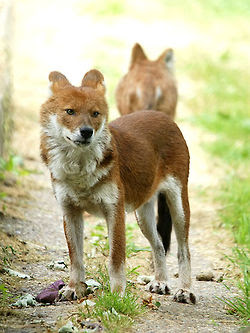 The Dhole (Cuon alpinus a.k.a. Indian Wild Dog or Asiatic Wild Dog), is a species of canid native to the Indian subcontinent and much of southeast Asia. It is one of the most unique canines alive, and it belongs to its own genus (Cuon). Its closest relative is the African Wild Dog. The Dhole is one of the most social wild dogs. Dholes live in clans usually numbering up to a dozen individuals, although 40 member clans have been reported. Their social groups are identified as clans as opposed to packs because they have a looser social structure than say a wolf pack. In contrast to a pack, members of the clan will break down into smaller groups when hunting. Prey items range anywhere from small deer, to elephant calves. Although they only weigh 20-50 lbs, Dholes still manage to fight off most other predators in their territory as a clan, including 400 lb tigers, 80 lb leopards, and 300 lb bears.
No matter how strong and majestic the Dhole is, it cannot fight against ongoing prosecution by humans. Fewer than 2,500 Dholes remain wild and they have a declining population trend. They are threatened by depletion of their prey base, habitat loss, hunting, population fragmentation, and disease transfer from domestic dogs. Fragmentation specifically is a serious problem affecting many animal species. This occurs when you have one very large population, which is then broken up into several different smaller populations. They can be separated due to barriers such as the construction of cities, highways, or simply excessive hunting in a single location. The issue here lies with the fact that one population may be nearing overpopulation, while another population 40 miles away may have very few individuals. Yet there can be no interchange of specimens because of sprawling metropolises right in the middle. The area suffering from overpopulation will begin to see much higher mortality rates while there’s perfectly good and inaccessible territory right next door.