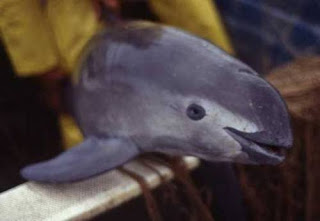 The World’s Most Endangered Marine Mammal Can Be Saved With One Simple Change
If gillnets were banned in the upper Gulf of California, the population of the vaquita porpoise would almost certainly recover, say scientists.
by David Kirby
Can money and technology be deployed in time to save the vaquita, the planet’s smallest and most critically endangered cetacean? It’s possible, but the clock is ticking for these rare and elusive porpoises of the Gulf of California, whose numbers are dwindling yearly, mostly due to death by drowning in fishing nets.
Last month the Mexican government approved an ambitious plan to require nets that do not snag and kill cetaceans or sea turtles. But the state-of-the-art nets, more expensive and difficult to use than traditional trawl nets and gillnets, will be phased in over three years. Meanwhile, annual deaths among vaquitas, who now number less than 200, were estimated at 40 or more before 2008.
(read more: TakePart.org)
Posted by alisha marie [smiles] at 1:20 PM