An environmentally friendly battery made from wood

Taking inspiration from trees, scientists have developed a battery made from a sliver of wood coated with tin that shows promise for becoming a tiny, long-lasting, efficient and environmentally friendly energy source. Their report on the device — 1,000 times thinner than a sheet of paper — appears in the journal Nano Letters. 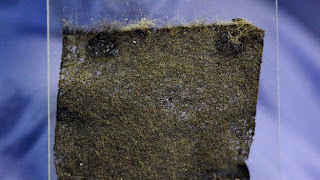 Liangbing Hu, Teng Li and colleagues point out that today’s batteries often use stiff, non-flexible substrates, which are too rigid to release the stress that occurs as ions flow through the battery. They knew that wood fibers from trees are supple and naturally designed to hold mineral-rich water, similar to the electrolyte in batteries. They decided to explore use of wood as the base of an experimental sodium-ion battery. Using sodium rather than lithium would make the device environmentally friendly.
Lead author Hongli Zhu and other team members describe lab experiments in which the device performed successfully though 400 charge-discharge cycles, putting it among the longest-lasting of all sodium-ion nanobatteries. Batteries using the new technology would be best suited for large-scale energy storage applications, such as wind farms or solar energy installations, the report indicates. acs.org npr.org
Posted by alisha marie [smiles] at 9:06 AM