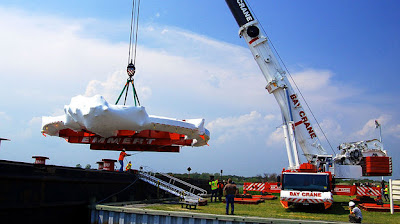 It looks almost like the Millennium Falcon, creeping ever so slowing, taking up the entire roadway on New York's Long Island. A team of spotters walks alongside, calling out trees that need cutting and road signs that need to be taken down.
Its name is the Muon g-2 (pronounced g minus two) and it's a very powerful electromagnetic ring capable of carrying 5,200 amps of current, says Chris Polly, the lead scientist for the ring's experiments.
"It creates a very strong magnetic field that allows us to store a special particle called a muon," he says.
A muon is a sort of phantom particle that exists only for a very short time after a particle collision. The g-2 traps muons and then uses them to probe for evidence of other new particles no one has seen before. Back in 2001, scientists at Brookhaven National Laboratory on Long Island found hints of new particles, but to be sure, they need more muons. Fermi National Lab, located outside Chicago, has a big accelerator that can produce loads of them, but no ring. So, you just need to bring the ring to the accelerator.
npr
Posted by alisha marie [smiles] at 1:59 PM