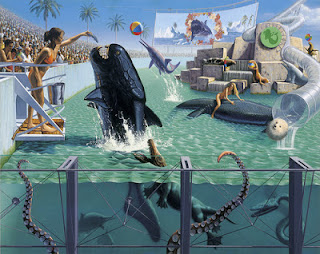 “Rockman likes to play with our expectations of what’s normal. In the painting called Sea World, an audience watches as a collection of marine animals performs tricks, but the animals are nothing like the killer whales and dolphins we’re used to seeing.
“They’re familiar because of their roles,” says Rockman. “Some of them are familiar from paleontological history. You have a Dunkleosteus, which to me is the most frightening predator in history. It’s a Devonian fish that’s now, luckily for humans, extinct, but it was enormous and very frightening.”
The sea creatures, somehow restored to life in a theme park, hint at a future where cloning makes re-creating extinct animals possible.
“That’s part of his signature style — to make the familiar seem foreign to make our world seem otherworldly,” says Joanna Marsh, curator of the exhibition. And genetic engineering, she says, “is a recurring subject in Rockman’s work.” npr
Posted by alisha marie [smiles] at 11:15 AM