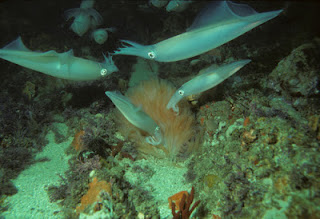 Squid could be in trouble as the oceans grow more acidic, new researchfinds.
As humans pump carbon dioxide into the atmosphere, the oceans absorb about a third of the greenhouse gas. This buffers terrestrial creatures from even more extreme effects of climate change — without the oceans, Earth’s atmosphere would contain far more than the approximately 400 parts per million of carbon dioxide that it does today. However, the dissolved carbon dioxide makes the oceans more acidic, possibly affecting thousands of marine species.
Squid, it seems, may be among the most vulnerable, with consequences that could trickle through the marine ecosystem. A new study published today (May 31) in the journal PLOS ONE finds that squid raised in more highly acidified ocean water hatch more slowly and are smaller when they hatch than squid raised in ocean water at today’s pH levels…
(read more: Live Science)
(photo: Roger Hanlon)
Posted by alisha marie [smiles] at 6:50 PM